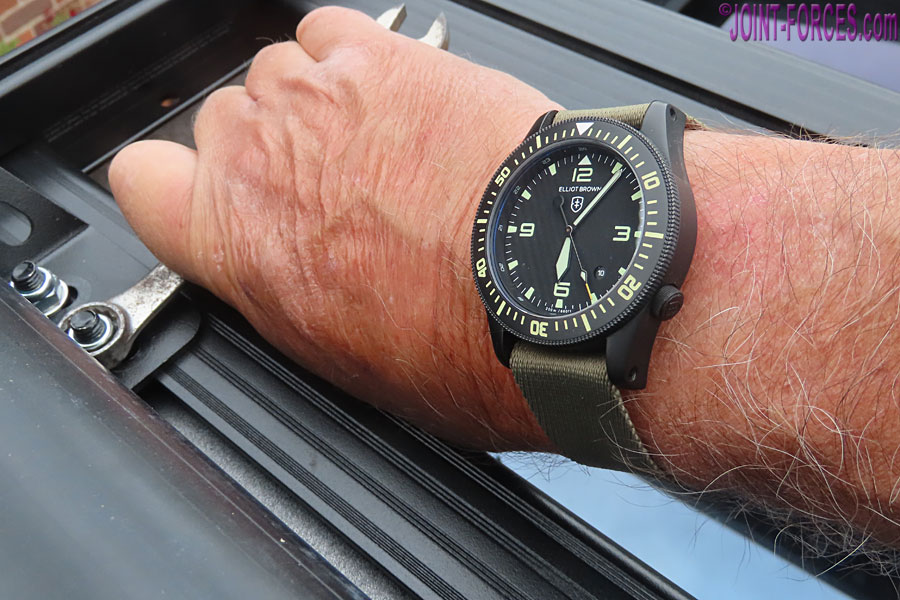 The Holton Professional watch was developed by Elliot Brown in collaboration with a specialist branch of UK Armed Forces, writes Mike Gormley.

As some readers may know I have covered Elliot Brown watches before and have been an ‘end user’ for some years. This one, however, is a bit different in that for those readers who are serving the Holton Professional (their 101-001 model) is a military issue watch with an NSN (NATO Stock Number).

The all-important and hard-earned number 6645-99-303-0677 engraved on the back of the Holton Professional means that this watch is approved for use by NATO forces. It is not just a case of writing off and saying “please can I have?” and this listing has to be earned, so it is a major milestone for Elliot Brown.

It was with some confidence that Ian Elliott sent me a note with the watch telling me not to hold back as I used and evaluated this Holton Professional. Well I haven’t held back but I have to say I have tried not to be overly aggressive. Any one can smash a product if they really want to. I have used this watch every day since it arrived and in doing so this Holton Pro has led a very varied life and has had to take a few knocks along the way. As I look at it now you would never know what it has been through over the last three months, and I know it has definitely had a few hard knocks on hard things.

Elliot Brown watches, of which there are now five distinct ranges, have some neat design features locked away inside to enable them to take the knocks of more than normal everyday life. As well as being tough they are waterproof and EB have gone to some slightly off-the-wall ways of testing this; such as tethering one to the bottom of Poole Harbour for six months. They have also been on some amazing journeys, with the likes of four guys who quite recently rowed around the UK. But perhaps the most arduous of real-life testing was a watch attached to the bow of an ocean racing yacht that circumnavigated the globe and all that offers.

On top of all this each individual watch produced is tested for its waterproof integrity; not many watches can boast this I am sure. Waterproof integrity is something held dear to Elliot Brown and they much prefer that you send your watch back when it needs a new battery, so when it leaves they know it is as waterproof as it is meant to be for the next round of use on your wrist.

Since I first got to know this small Dorset company they have come a long way. From a very limited number of options to a wide range of both watches and straps, which are another part of this story worthy of mention. An Elliot Brown watch strap is not ‘just a strap’ that holds the watch on and needs replacing fairly often. These have significant design and thought behind them, so they are extremely unlikely to fail causing you to lose your valued timepiece.

Elliott Brown produce bespoke variants of their watches for specific groups of sometimes quite special people. A number of let’s say ‘special’ military units and others have their own bespoke designs. Probably quite subtle, but conceived by the end user group and EB and only really known and recognised by those in the know. On the commercial side the new branded Land Rover Watch, introduced to complement their New Defender, is actually a Holton Professional; orders are being taken at the moment.

When all said and done a watch is on your wrist to tell you the time, accurately at any instant and in any circumstance – be it at a smart dinner or underwater. The Holton Professional (named after the location wartime Royal Naval Cordite Factory, between Poole and Wareham) accomplishes both and will move with you from one to the other seamlessly. (I wonder if Commander Bond wears a Holton Professional? Ed.)