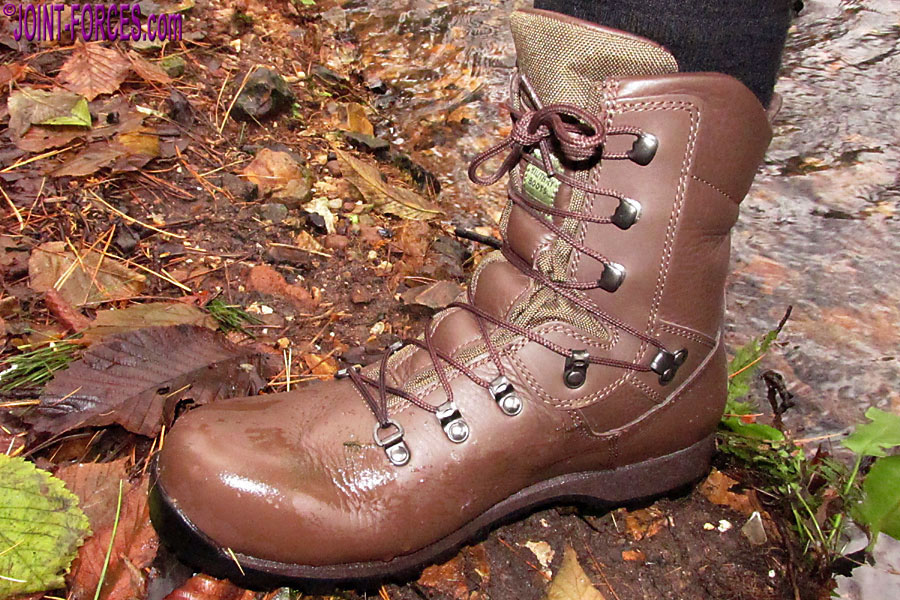 In recent weeks, with autumn and then winter setting in, I have been wearing the third evolution of the faithful ALTBERG Tabbing Boot, writes Bob Morrison.

Before I go any further I must point out that this particular pair of boots, manufactured back in May, is not to full Mark 3 standard as both the outsoles and lacing system are of earlier specification and the production model currently coming on-stream (the Tabbing Boot SF-Mk3) will look a little different. However the point of letting me have these prototypes was to give me a chance to try out the redesigned and snugger heel cup shape.

Like most diabetics, I have to take particularly good care of my feet and as a result for the last couple of decades I have worn sturdy boots (with substantial socks) rather than flimsier shoes for the vast majority of the time. Naturally I am a little wary of generating blisters when trying out new boots, but as I have been wearing ALTBERG footwear for much longer than twenty years (since the Master Bootmaker gave me a pair of his then new desert boots to take to the Sahara) and as I am well aware of the company’s long reputation for providing bespoke boots and shoes for military and police personnel with foot injuries or serious problems, I am never concerned about fit or comfort of this particular company’s new designs.

This latest evolution of the ALTBERG Tabbing Boot, which started life as a remodelling of the company’s classic Sneeker combat boot using their revolutionary AForme lasts, features not only a new heel cup design to form the boot better around the Achilles area but also features a very pronounced 20° upward toe roll to make running with a heavy load (i.e. carrying rucksack and wearing body armour etc.) much easier. For those unaware, in British Army and especially Parachute Regiment lingo to TAB is to Tactically Advance to Battle… and hence the Tabbing Boot’s apt model name. Of course I do not regularly need to tab anywhere with a combat load, though even my regularly carried SOURCE Assault camera and laptop daysack weighs up to 15kg and my bergen weighs much more than this, but those who have met me will know I have secreted away sufficient ale and pies over the years to be carrying the equivalent of another rucksack load about my person. Yes, while under evaluation these Tabbing Boots have carried more than their fair share of load… but I digress.

The Tabbing Boot is, with the exception of the tongue gusset which is textile, an all-leather boot fashioned from minimum 1.6mm thick full grain water repellent Nida Idro high quality leather from the Dani Tannery. Note at this point that this boot model does not use a waterproof laminate membrane in the construction and relies on the wearer taking proper care of it (see later) to maintain the leather’s waterproof properties. The lining at the front is 100% breathable Spacer Mesh and the back, heel and leg areas are lined with Cambrelle for comfort; and I find these to be very comfortable traditional combat boots indeed. The footbed (i.e. insole) is the ALTBERG designed Airgrid model, a two layer high density cushioned polyurethane composite with an open grid for air circulation and 1mm of felt underneath for comfort, which is fitted as standard across their combat and trekking boot ranges.

My test pair of boots, provided to allow me to try out the new heel design, came with Vibram soles fitted but the production model will have the well-proven Defender Hi-Traction soles with shock-absorbing heels instead. The midsole element of the dual density sole construction id Tri-Flex 9922. Open upper lace hooks were also fitted to my pre-production samples but the production batch designated Tabbing Boot SF-Mk3, which is coming on-stream in a range of half sizes from UK 7 to UK 13.5 between now and May 2023, in both MoD Brown and Black, will have closed upper eyelets. Personally, closed eyelets are my favourite as I find open hooks to be too fiddly. Paras, Special Forces (SF) and Special Operations Forces (SOF) personnel who might be called upon to parachute into action demand closed rather open lacing, so I suspect this latest model will quickly gain a following.

Turning now briefly to boot care. While waterproof membranes do have their advantages, and particularly when lightweight fabrics are used for trainer-type boot uppers, natural leather boots can sometimes be better for the feet… just so long as the wearer keeps the leather in good condition. ALTBERG supply a very reasonably priced range of water-repellent wax oil (LEDER-GRIS) and polish (LEDER-GLOS) products to help keep leather boots in tip-top condition. They and we do not, however, recommend using cheap and cheerful boot polish products on leather combat boots (unless, of course, you wish to express your individuality by standing to attention on the parade ground in burgundy coloured boots).

Final thoughts on the ALTBERG Tabbing Boot MK3? A really good pair of traditional leather combat boots that are not only comfy and fit well but also, courtesy of that unique upward toe roll, work really well on uneven terrain if moving fast carrying a load. I like them, but reckon I would like them even more if my pair had been fitted with the latest closed upper lacing (SF-MK3) system.

¤ NB: AForme is a Registered Trademark belonging to ALTBERG