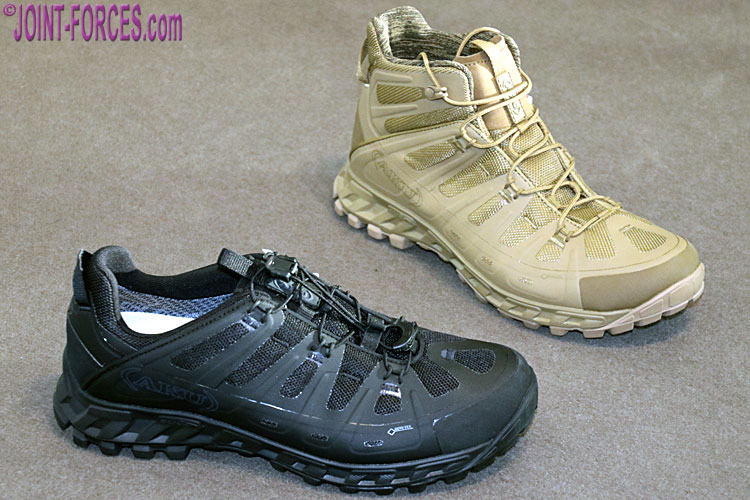 At the MiliPol police and security expo held in Paris in November we had our first chance to photograph the AKU Selvatica Tactical GTX footwear range, writes Bob Morrison.

The MiliPol expo was actually not the first time I had seen AKU Selvatica Tactical footwear, as the French distributor had samples on his stand at the SOFINS Special Forces expo held near Bordeaux last April, but as this range was so new at the time and he did not have explicit permission from the AKU Head Office in Italy to allow press photography I was only able to look. Fortunately AKU senior management were at MiliPol and they allowed me to take two different models off the display stand to snap them.

Already attracting interest from some Special Forces operatives, who of course are often able to wear footwear of personal choice rather than the more mainstream models which conformity demands most soldiers and police officers have to wear, Selvatica Tactical boots and shoes were “designed for the urgent intervention forces and for multi-terrain activities”. Weighing just 460g per individual middle size range (i.e. UK9) mid-height boot, the Selvatica Tactical Mid GTX is marketed as being super lightweight and its rather unique construction certainly appears to have pared back the weight. The uppers are constructed from AKU’s Air 8000 fabric to which ribs of polyurethane film have been welded, mostly eliminating the need for stitching, and the front of the toecap is protected by a rubber rand. Four-layer, moderately insulated, Gore-Tex Performance Comfort membrane is used for the lining ‘sock’ and an OrthoLite footbed is provided. The outsole is VIBRAM’s Selvatica MEGAGRIP pattern, the shock-absorbing midsole has injected EVA polymer, and the lasting board is a combination of 2.0mm polypropylene plus micro-porous EVA for stiffness and flexibility.

Note: At time of writing I have not yet been able to wear test the AKU Selvatica Tactical Mid GTX boot or Tactical GTX shoe, so the above is based on observation and the manufacturer’s product information sheets.