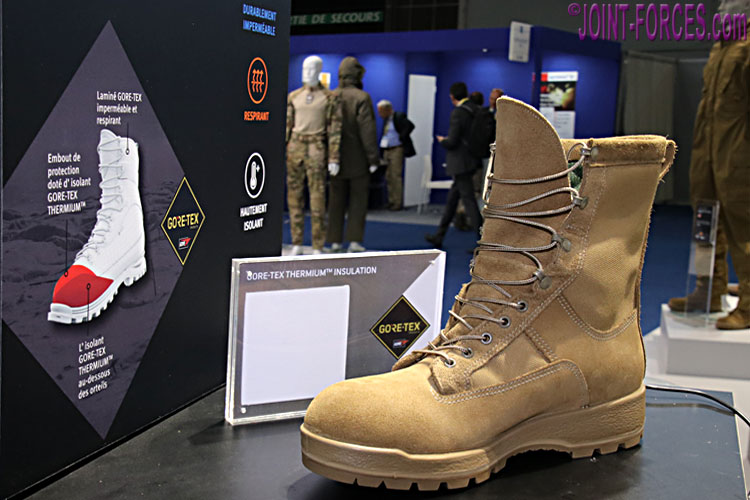 US combat boot incorporating a Gore-Tex THERMIUM toe box, with a sample of the 1.7mm thick high insulation membrane behind [©BM]

Gore-Tex THERMIUM, a trademarked product name for a new two-layer laminate, first appeared in outdoor garments the United States in late 2016 and this year has started to appear in fashion footwear under the brand name INFINIUM THERMIUM, promoted as a means of keeping the foot perceivably warmer than if wearing an uninsulated shoe. On the company stand during MiliPol Paris 2019 a combat boot was embedded in a block of ice to catch the attention and when we asked the team for an explanation they told us that this new technology had already been field tested by troops in extreme cold weather environments.

So what exactly is THERMIUM? Essentially it harnesses NASA Space Shuttle technology, in the form of silica aerogel, to established Gore-Tex PTFE membrane technology to provide an ultra-thin, low-bulk, non-compressible insulation layer. Anyone familiar with the current US military Extreme Cold Weather Boot (ECWB) with thick insulation consisting of triple layers of polyester foam encased and hermetically sealed in rubber, which is intended primarily for Arctic use, will appreciate that even though this boot provides protection down to -60°F/-50°C, it is both bulky and cumbersome; it is also inflexible and is not ideal for wear by drivers and equipment operators. By mating silica aerogel, the compound used to protect the Space Shuttle from extreme heat during re-entry, to a PTFE (i.e. poly tetra fluoro ethylene) membrane Gore have created an approximately 1.7mm thick flexible and compression-resistant insulation material that can be “cut and treated like leather and applied to combat boots in a way that retains boot breathability and agile performance”. According to Gore, using thermal mapping they identified that the toe box is the critical area of heat loss and to address this area affected the fastest by exposure to extreme cold weather they suggest strategically placing a layer of Gore-Tex THERMIUM insulation here to save around 80% of foot warmth without either “reducing the agility and breathability that are critical for maximum footwear performance” or changing basic boot shape and design.

As a way of showing just how much insulation THERMIUM membrane provides, one of Gore’s European Military & Public Safety team laid a square of conventional breathable fabric atop the previously mentioned ice block, placed a square of THERMIUM alongside it, and then invited me to press down hard with both hands flat on the freezing cold surface until it became too cold for comfort. In a matter of seconds the fingertips of my left hand became uncomfortable and shortly afterwards it began to feel like I had been making snowballs with one hand bare and the other hand gloved. If anything, my right hand began to feel warmer as my own heat warmed the air above the THERMIUM fabric while the palm and fingertips of my left felt like they were freezing. If you have ever undertaken the classic Gore-Tex membrane ‘hand in a bucket of ice’ demo, the results here were just as impressive.

In due course Gore should be producing a formal press pack on THERMIUM For Defence Footwear (at present only a simple, double-sided leaflet for distribution at expos has been produced) and when we receive the detailed release and learn more about how the new insulation is being used in military issue combat boots we’ll bring you an update.