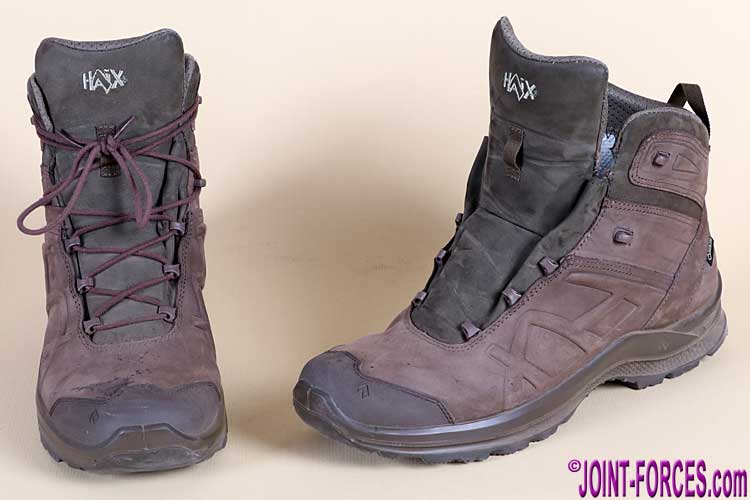 This Nature version of the Black Eagle family (there are also Adventure, Athletic, Tactical and Safety versions) is a lightweight, mid-height boot with breathable Gore-Tex membrane aimed more at the civilian market than at military wearers, though its colours work well with MultiCam/MTP camouflage uniform.

Weighing around 620 grammes for a UK Size 10.5 (EU45 or US 11.5) the 1.6-1.8mm thick Nubuck version is about 30g (1oz) lighter than the polished leather Tactical 2.0 version, but with the exception of its outer uppers it is otherwise pretty much identical in basic construction to its brown full leather military boot sibling known as the Black Eagle Tactical 2.0 T Mid/Brown. For those unsure of precisely what Nubuck is, the term refers to leather from cattle which is buffed on its outside face (unlike suede, which is the inside face) to give a soft and almost velvet-like feel. Although durable and tougher than Suede, Nubuck cannot be polished and therefore it has a tendency to stain, but it is also easier to colour; the greenish outer faces of the tongue and collar of the Nature version are also Nubuck.

As Nubuck scuffs easier than more conventionally treated polished leather, a toe protection rand identical to that found on the suede and fabric construction Black Eagle Athletic desert boot model is fitted to the Nature GTX and this seems to work well. The five pairs of lacing tunnels are nylon, as per the other Black Eagle models I have trialled, but the new Nature model does not have the quick release lace fastener with tongue pocket that we have come to expect on other Black Eagles; when first introduced to that fast-lacing system several years ago, on a visit to the HAIX Mainburg factory, I was unconvinced of the new introduction, but I speedily became a convert and actually quite miss it on this civvy version.

The lining in this boot is primarily the uninsulated Gore-Tex Extended Comfort three-layer laminate,which is waterproof and breathable, recognisable by its light grey squarish pattern on the visible face and with abrasion-resistant Micro-Dry mesh fabric at the collar. The proprietary HAIX Climate system utilises the pumping movement of the foot to generate air circulation with every step allowing warm air to be released through the Micro-Dry mesh at the top of the boot leg. Incidentally, over the Military Odyssey weekend in Kent at the end of August we experienced the hottest Bank Holiday on record for England but these Gore-Tex boots kept my feet both cool and fresh over two consecutive very long days of travel (to/from Devon) early morning to late afternoon and trekking around the show. That stain on the left toe, visible in the photos, was caused by some numpty spilling Titanic Plum Porter on the evening between my two days at Detling, but a bit of buffing with a suede brush has now removed this.

The self- cleaning, durable rubber outsole (which is identical to that found on other Black Eagle 2.0 boots and a tread variation of the earlier HAIX Black Eagle sole) is oil-, petrol- and heat-resistant as well as cold-insulating, compliant with EN ISO 20347:2012. The pattern and composition was designed by the HAIX in-house team with the aim of giving excellent grip on a variety of terrains and, other than on wet black ice in Norway when wearing a different Black Eagle boot rather than a specialist Cold Wet Weather boot designed to cope with such extremes, I have encountered no issues whatsoever with this tread design on various surfaces.

The midsole is lightweight elastic two-layer polyurethane with a cushioning effect, plus a stabilisation zone for optimal pressure distribution on uneven terrain. The comfortable insole, which I have worn for the duration of this test rather than substituting with my favourite brand memory foam equivalent, is cushioning and both moisture repellent and anti-bacterial with a shaped heel cup for both cushioning and correct foot placement. Although this is a standard company component, it is on a par with some specialist aftermarket insoles and of higher quality than one often finds supplied as standard in off-the-shelf boots.

One last word on the various HAIX Nature models, which were originally publicised as Cross Nature:-