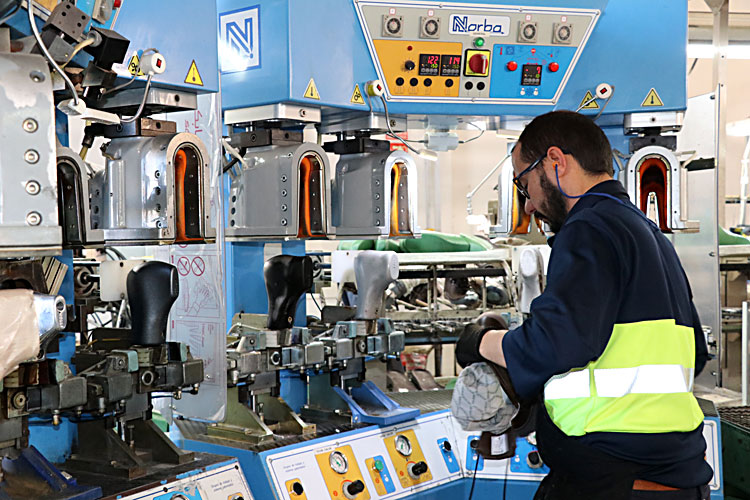 Although ITURRI have supplied both combat boots and formal footwear, plus garments from dress shirts to breathable waterproofs, to the UK Ministry of Defence for a good many years it is possibly not a name that many readers will be familiar with as, until relatively recently, overt display of brand names was prohibited on products in some categories.

On the combat boot side, Seville-based ITURRI actually supplied a boot in all five categories for the MoD 2012 five-year contract, though only one of these was actually an ITURRI boot design and the others were established models from different manufacturers (ALTBERG, BATES, MAGNUM and MEINDL). The fifth 2012 boot model was in the Cold Wet Weather category and these were supplied in KARRIMOR boxes, but while visiting the Spanish company’s HQ our suspicions were confirmed that this was actually their own winter combat boot model which they marketed under a licensed franchise name.

By the time that the UK MoD started issuing new five-year combat boot supply contracts, in late 2017, not only had the rules on brand names being displayed on footwear been relaxed but three of ITURRI’s own boot models now better fitted the precise MoD specification requirements; based on its popularity and specification the company stuck with ALTBERG (Defender Mk.II model) in the Combat High Liability category and to keep costs down for the low volume Jungle category they bought in a well-established US boot design. Incidentally, although alternative fits from different manufacturers were procured across all five categories for the 2012 contract, to try to reduce the percentage of soldiers whose feet were unsuited to the issue boots, for the 2017 contract only the Combat High Liability and Desert Combat High Liability categories had alternatives; these alternatives were from AKU and HAIX respectively.

This March an ITURRI Cold Wet Weather boot batch destined for issue to UK MoD personnel earmarked for deployment to Norway, the Baltic and other cold and wet climes later this year was under production at ITURRI’s La Palma del Condado factory, situated just off the main motorway between Seville and Huelva. As I had a gap in my schedule on account of UK MoD not currently inviting specialist defence media like us to cover training exercises – we understand ‘not on the MoD target audience aims’ is the current civil service buzzword – I naturally grabbed the opportunity to watch how these boots, which I had previously taken out to Norway to review on TRIDENT JUNCTURE 2018, were constructed. This is actually the fourth footwear factory making combat boots for UK MoD that I have visited over the last few years, but as each manufacturer does things slightly differently it was a very interesting visit.

ITURRI not only manufacture boots and shoes at various locations around Spain, including on Majorca where high quality traditional dress shoes are made for UK Forces, but they also have production facilities in Eastern Europe, the Far East, North Africa and South America. The footwear factory at La Palma del Condado in south-west Spain is one of their older facilities, and indeed plans are underway to replace it with a larger plant on family land a little to the east of La Palma; the company, founded in 1947 as a ship’s chandlers on the banks of the navigable Guadalquivir in the heart of Seville, is still family-owned. Incidentally, as well as their footwear and specialist clothing ranges, ITURRI are also a major supplier of equipment and vehicles to the emergency services around the globe and they have offices in 25 countries.

Back to the Boots, Cold Wet Weather as currently being supplied to the UK MoD. The all-leather uppers for these boots are stitched, complete with a Gore-Tex four-layer Insulated Comfort breathable and waterproof laminate sock, at an ITURRI factory in Morocco before being transferred by road and ferry to their La Palma factory in Huelva Province. Once at the Spanish factory the uppers are lasted, the insoles are affixed, the substantial protective rubber rand is glued on, they are soled using a heated glueing process, pairs are individually inspected visually, they receive a final buff and then they are packed along with spare laces, a lacing guide and a bootcare advice card (ITURRI recommends LEDER-GRIS and LEDER-GLOS for their leather combat boots) then palletised for shipping to a Leidos UK warehouse for onward distribution to the troops.

Image Gallery, from top left to bottom right:-
¤ Uppers with Gore-Tex sock attacked
¤ The insole is added
¤ The toe is formed
¤ The boot takes shape
¤ The underside is prepared
¤ Quality control check
¤ Pairs awaiting soling
¤ Rand is prepared
¤ Rand is fitted
¤ Glue is applied for sole
¤ Sole is heat fixed
¤ Finished pairs are inspected
¤ A final buff and …
¤ CWW Boots are packed for delivery.