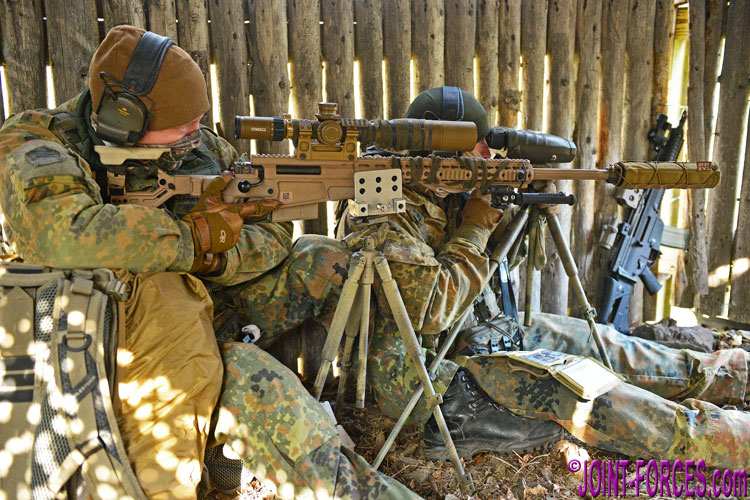 Upgraded by Accuracy International Limited to G22A2 standard, the weapons replace the Scharfschützengewehr (literal translation Sharpshooter Rifle) G22 and G22A1 weapons, that entered service in the late nineties, and are variants of the Arctic Warfare Magnum-Folding Stock (AWM-F) sniper rifle.

When the G22 and G22A1 were initially fielded they revolutionised German Armed Forces sniper doctrine. Replacing the sniper scope equipped versions of the 7.62x51mm G3 assault rifle, the bolt-action weapons allowed German snipers for the first time to engage targets at ranges above 600 metres and, according to their armed forces manual out to 1,100 metres, with a high first-round hit capability. On 19th October 2018, according to Tenders Electronic Daily (TED), the online version of the Supplement to the Official Journal of the European Union, Accuracy International Limited in Portsmouth was issued a contract through its German business partner POL-TEC e. K. in Fürth to upgrade the in-service G22 and G22A1 to G22A2 standard, with the last weapons to be delivered in 2020. Earlier, the Bundeswehr stated that the sniper rifles had to be upgraded due to the fact that obsolescence and technical advancements in the field of sniper weapon technology had to be addressed.

The Upgrades: While the action, lock, trigger group and barrel of the weapons were retained as part of the upgrade process, the weapons were fitted with: a new chassis from the AX Rifle System developed by Accuracy International Ltd; a new Accu-Shot Precision Rail Monopod (PRM) Model BT12-QK and a new BT46-LW17 Precision Sniper Rifle (PSR) Atlas Bipod, both manufactured by B&T Industries LLC; a new double chamber muzzle brake from Accuracy International Ltd; and a new M5Xi 5-25×56 MTC LT LPF – TreMoR3 sniper scope manufactured by the Steiner-Optik GmbH. The sniper scope replaced the 3-12×56 sniper scope manufactured by the Hensoldt AG previously fielded with the G22 and the 3-12×50 sniper scope manufactured by Schmidt & Bender previously fielded with the G22A1. The Steiner-Optik GmbH sniper scope is also employed by the German Special Forces on their new .338 Lapua Magnum (8.6x70mm) Scharfschützengewehr mittlere Reichweite G29 medium range sniper weapon system that entered service in 2017.

Large Accessory Pack: In addition, the G22A2 upgraded weapons are issued with a large accessory pack that includes, among other parts: a gun case made of crush-proof polymer; five spare magazines; an SASR anti-mirage shield for the suppressor, manufactured by T.A.B. Gear; a Swiss Tool Plus multi-tool, manufactured by the Victorinox AG; a comprehensive cleaning kit; two Case Guard cartridge boxes for 20 cartridges each, manufactured by MTM Molded Products Company; a drag bag; a biathlon weapon carrying sling; a belt with four magazine pouches that each can hold one five-round G22A2 box magazine; a muzzle cover; three drill cartridges; a cover for the sniper scope; several bean-bag/shooting rest pouches; and a Kestrel 5700 Elite Ballistics weather meter with applied ballistics.