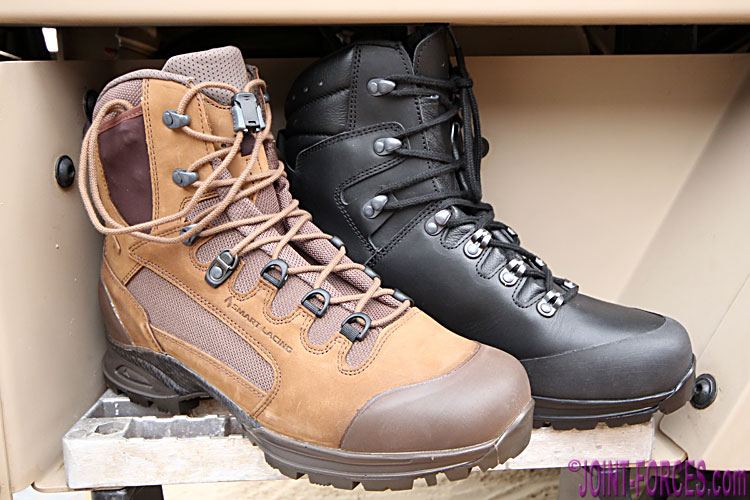 We first spotted examples of these new boots on the HAIX stand at IDEX 2019 in Abu Dhabi last month but specification sheets in German or English were not available at the time so we could not provide more detail. Aware of our interest, HAIX HQ in Mainburg has now provided full details in both languages (German to Carl and English to yours truly) to allow us to update J-F readers.

The Combat Boot Light (Kampfstiefel Leicht) is simply a minor variation of the now widely worn HAIX Scout model, in a slightly darker brown shade than normal, and the Combat Boot Heavy (Kampfstiefel Schwer) is one of two new designs of combined Boot Combat High Liability / Boot Cold Wet Weather produced specifically to Bundeswehr specifications and requirements. Both HAIX boots have been rolled out in very high quantities over the last year or so, but with the Kampfstiefel Leicht currently being issued only to troops assigned for overseas deployment in hot or arid theatres though in due course every German soldier should be issued with two pairs Schwer and one pair Leicht.

Starting first with the Kampfstiefel Leicht, other than the slight colour change requested by the German military, there is very little difference between this version and the mainstream Scout model which I reviewed last August and updated last December following a short trip out to Egypt. I therefore do not plan to go into detail again on this page. The English language version of the Kampfstiefel Leicht specification sheet, other than a change of main image, is virtually identical to the PDF spec sheet on the HAIX Scout page of the company website with the exception of a single minor wording change. However the darker brown Kampfstiefel Leicht model is only produced in full UK sizes 6 to 14, whereas the standard Scout model is available from UK 3.5 to 14 in half sizes.

The Kampfstiefel Schwer, on the other hand, is a full leather VIBRAM sole black combat boot designed to fully meet the specific requirements of the German Armed Forces and is unlike any other model currently offered on the HAIX e-commerce website; visually, the closest model would be the KSK 3000 but specifications are very different. As with the recent trend in several other NATO armies, this boot is scalloped quite low at the back (a necessity for those travelling for long periods on blast-suppressed seating inside armoured vehicles) and as a result it only has seven pairs of lace eyelets (plus one on the tongue).

According to the specification sheet the Kampfstiefel Schwer uppers are manufactured from 2.5mm to 2.7mm thick hydrophobic and breathable waterproof leather, with both toe and heel areas being protected from knocks and scuffs by a thick rubber rand. The lining is the non-insulated abrasion-resistant Gore-Tex Extended Comfort three-layer waterproof and breathable laminate (the lightest of the three grey shades) chosen to give optimal climate comfort through all seasons (i.e. not too warm in summer, but warmer socks will need to be worn in winter).

The outsole is of the same VIBRAM pattern found on the HAIX Scout and the composite walking sole construction is a combination of rubber and polyurethane to provide both support and comfort when carrying heavy loads. This well-proven VIBRAM tread design is intended to give good traction, both on streets and off-road, as well as being oil, petrol and heat resistant in compliance with EN ISO 20347:2012. The insole or footbed is anatomically formed, exchangeable, washable and quick-drying.

Like most of this manufacturer’s boots, the Kampfstiefel Schwer uses the HAIX Climate System which uses an in-built pumping movement to give air circulation around the foot with every step with warm, often moist, air being released through the Micro-Dry lining at the top of the boot leg through vent holes in the collar. The HAIX Two Zone Lacing System, with pairs of roller eyelets at the three lowest positions and four pairs of open hooks higher up, allows a separate adjustment of the boot to both the foot and the lower leg (though as not specified by the client the very useful HAIX locking D-ring arrangement at the mid point is not included).

Unfortunately, as the Kampfstiefel Schwer is not currently commercially available I have not been able to wear test this boot but my initial impressions on handling one were that it looks like this one might turn out to be a classic. According to the spec sheet, this boot is being produced in half sizes from UK4.5 through to UK14 – i.e. EU 37 to EU50.