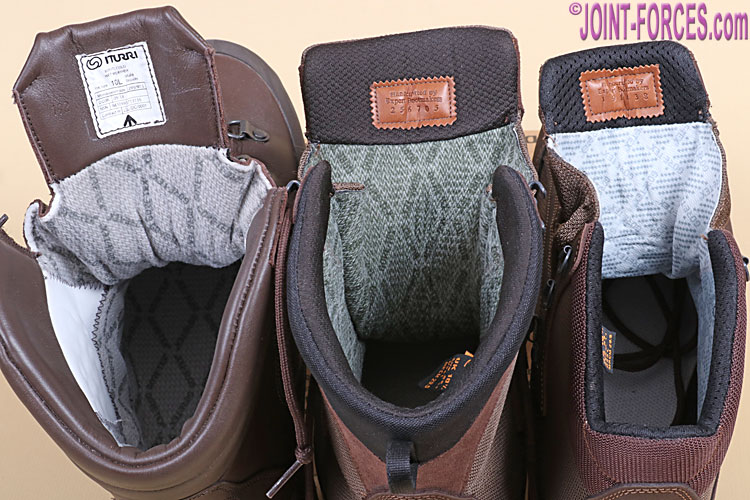 With the introduction of another batch of brown combat boots by UK MoD a slight degree of confusion over breathable membrane laminates has arisen, writes Bob Morrison.

When the MoD introduced a new batch of (brown) combat boots around 2012 there was effectively just one Gore-Tex membrane laminate for footwear and things were quite simple; either the boot had an inner Gore-Tex breathable and waterproof sock built in or it didn’t. However by the time that original five-year supply contract had ended and new ones were placed, for different boot models, WL Gore and Associates had introduced their new Comfort range of laminates designed to cope with a wider range of environmental conditions faced by troops on operations.

In the spring of 2014 I had a visit from two of Gore’s associates who specialise in the footwear side of the company when they were down in Devon on military business and they brought me up to speed on some of the new Gore-Tex technology developed for the next generation of combat boots. A few months later I was invited out to Bavaria to visit the company’s European laboratories at Putzbrunn and Feldkirchen, then taken to the HAIX factory and testing facility in Mainburg to see how the new laminates were incorporated into the company’s manufacturing processes.

Back then Gore had been working closely with four established combat boot manufacturers – HAIX, LOWA, MEINDL and YDS – who also used the earlier laminate to perfect the new range and the designs were by now mature. Over the last four years I have wear tested, and in one case destruction tested, many different boot makes which now incorporate the Gore-Tex Comfort range and can vouch for their comfort and efficiency.

The rest of this article is a slightly edited extract of my original writings on this topic from the start of 2015 when everything I had gleaned on my trip to Bavaria was still fresh in my memory. Hopefully it will come in useful for those who have told us, mostly through social media groups such as the ‘invitation only’ CKC and by messaging our own page, that they are finding the topic a little confusing:-

In recent years we have seen remarkable advances in Gore-Tex waterproof combat clothing, as any member of UK Armed Forces who has been issued with the latest Gore-Tex lightweight waterproofs will be well aware, and the new Gore-Tex fabrics developed for the Italian armed forces uniforms we saw unveiled at a couple of the international defence expos during 2014 look pretty amazing, but it is in the footwear field that W.L. Gore are, if you’ll excuse the pun, really striding ahead. Not only do membrane laminates used in boots need to be both breathable and waterproof, but they also have to be extremely tough to cope with the continuous flexing and abrasion caused by the way our feet continuously move when we walk, run and jump etc. WL Gore sample card with the three Gore-Tec COMFORT laminates – colour and pattern of outer lining layer is the identifier and this guide should hopefully end any user confusion [© BM].

The INSULATED COMFORT Footwear 4-ply laminate is designed primarily for cold weather outdoor activities in winter and has a protective knitted mesh on the outside face of the Gore-Tex membrane and a thick high insulation layer on the inside with a tough but soft mid-grey (diagonal pattern) lining next to the foot.

The PERFORMANCE COMFORT Footwear 4-ply laminate was developed for a wide rage of activities in changing weather conditions and also has a protective knitted mesh on the outside face of the Gore-Tex membrane but a thinner moderate insulation layer on the inside with a soft yet durable dark grey (diagonal pattern) lining next to the foot.

The EXTENDED COMFORT Footwear laminate, however, is only 3-ply as it is intended for warm weather use and though it too has a protective knitted mesh on the outside face of the Gore-Tex membrane it has no insulation layer between it and the light grey (squarish pattern) durable soft lining next to the foot.

The latter is the most exciting of the three laminates as not only does its use in a combat boot make it durably waterproof and present an effective barrier against pathogens (i.e. those nasties found when treading through stagnant water and sewerage) but it also allows the boot to be highly breathable in hot climates.

We have not yet been able to review the HAIX Desert Combat High Liability, ITURRI Patrol or ITURRI Jungle models. New ALTBERG CHL issue boot does not use Gore-Tex [© BM]