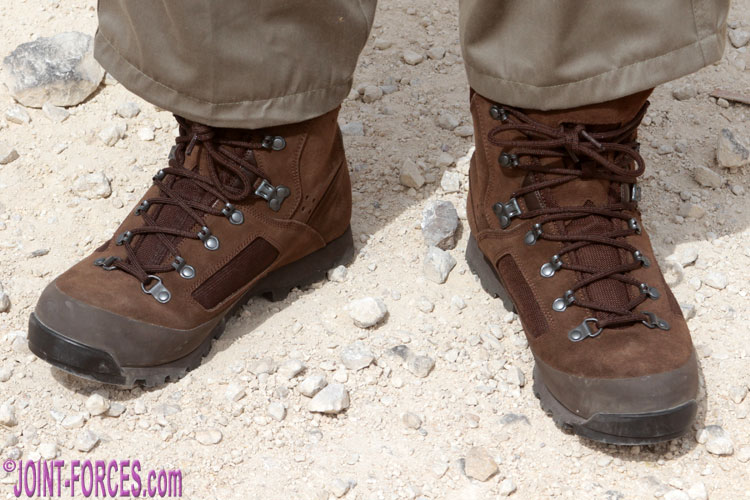 As previously mentioned, I took two new pairs of desert boots with me for evaluation on my recent trip to Jordan; the new UK Desert Combat High Liability boot from Iturri and the Black Eagle Athletic 2.0 from HAIX.

In due course I will pen a full review on each of these boot models, one of new generation lightweight construction and the other of a more conventional design, but as it will take me some time to catch up on being out of the office for over a fortnight I’m creating this brief update for now to let readers know how I got on.

The tan coloured HAIX Black Eagle Athletic 2.0 VT Mid-height Desert Boot (see below) is not completely new to me, as in the past I have reviewed several siblings from the Black Eagle range, but unlike most of the others this second generation (hence the 2.0 in the title) lightweight boot model does not use one of the new Gore-Tex membrane linings. This boot, which was my primary footwear during my 14-day trip to the Middle East, also has a slightly different sole pattern from the earlier 1.0 version and has minor detail changes which I will go into when I write up the full review.

The brown Desert Combat High Liability boot from Iturri, one of two new Desert CHL models about to be issued to UK Forces, is completely new to me and although it has some similarities with both a couple of past UK-issue desert combat boots and a current Spanish Forces combat boot supplied by Iturri it appears to be a completely new model. I wore this pair of boots for three full days out on the ground at KASOTC (King Abdulah II Special Operations Training Center) and, by way of contrast, one full day pounding concrete and tarmac at SOFEX (the Special Operations Forces Expo). Even though these boots only arrived just before my trip started, they proved to be exceedingly comfortable.

The Iturri DBCHL is not currently available for private purchase, but the Black Eagle Athletic 2.0 VT can be bought online by going to this HAIX.co.uk shop link.

Bottom line? Both of these boots lived up to expectations and were comfortable even though I did not have time to break them in fully before departing. More to follow in a few days.

Footnote: I don’t usually wear my trousers at half-mast but tugged them up a bit to show more of the boots. I wore the HAIX Black Eagle Athletic 2.0 VT Mid-height Desert Boots as primary footwear out to Jordan and throughout most of WARRIOR COMPETITION and SOXEX [© BM]