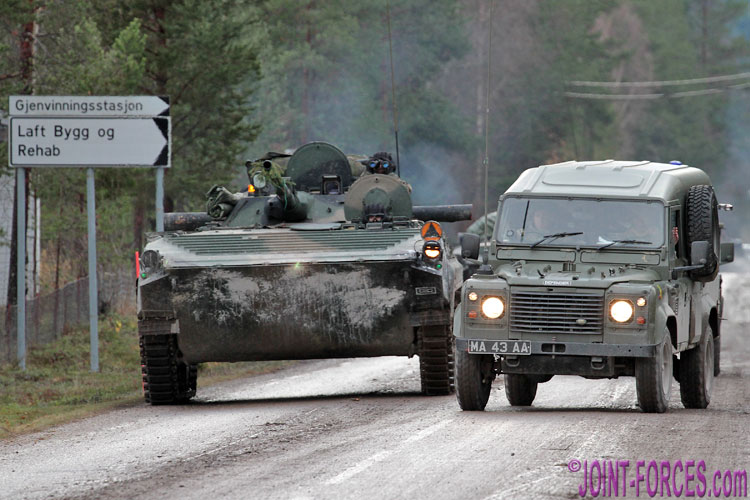 As we have previously briefly seen, France and Poland also used small numbers of Land Rover Defenders in specialist roles but these were slightly militarised versions of the Core Model five-door Station Wagon rather than the full-on military specification WOLF. Although invariably called the WOLF, its codename during trials in the first half of the 1990s, this specialist chassis long wheelbase model is actually classified as the TRUCK UTILITY MEDIUM (TUM) Higher Specification (HS) by the UK MoD and as the Defender XD (eXtra Duty) by the manufacturer; for more detail see MLR Part 7 in this section.

Norway in autumn is a beautiful country when the sun shines, not that we saw blue skies much on TRJE18 other than during the morning of the Distinguished Visitors Day up at Trondheim on the coast, but cold and dismal conditions tend to predominate further inland in early November. It was therefore no surprise to see that almost every WOLF deployed up-country by the British-led 4 Multi-National Brigade (4 MNB) was a hard top model rather than the near impossible to heat soft top version; note that I said almost as I actually spotted a couple of rag top 110s in the field and indeed the very last Defender that I snapped just after EndEx had been declared was one of these.

Britain’s 4th Infantry Brigade, which formed the nucleus of NATO’s 4 MNB on the 31-nation exercise and had both a Danish armoured battalion and a Polish mechanised company under its command plus a Norwegian Home Guard company in support, had elements of 1st Battalion of the Duke of Lancaster’s Regiment (1 LANCS) and 1st Battalion of the Royal Irish Regiment (1 R IRISH) as its lead infantry components. Both part of the Adaptable Force, 1 LANCS operates as a Light Role Infantry battalion transported primarily by MAN SV 4×4 trucks (Troop Carrying Vehicle or TCV variant) and is trained for heliborne insertion, whereas 1 R IRISH operates in the Light Protected Mobility role transported in the FOXHOUND Light Protected Patrol Vehicle or LPPV; although a small number of armoured 4×4 PANTHER Command and Liaison Vehicles and 4×4 HUSKY Tactical Support Vehicles are also used by 4th Infantry Brigade, many of the battlegroup’s utility vehicles in Norway were Land Rover Defenders.

As is to be expected of units home based in the the UK, almost all of the WOLF Land Rovers deployed forward with 4 MNB were right hand drive models but a very small number of left handers were fielded by supporting units such as Royal Engineers and Military Police. The short wheelbase WOLF 90 or Truck Utility Light (TUL) variant, which it was soon realised had insufficient payload space for most roles but which was originally required by airborne and amphibious units with limited transportation capacity, has now almost vanished from British Army service, though some RE and REME Warrant Officers seem to be hanging onto a few, but I did spot one example at the Forward Command Post which looked to be serving in a communications role and interestingly this rarity was also left hand drive.

One final point which caught my eye was that almost every British Army Land Rover I snapped during TRIDENT JUNCTURE 2018 was towing a well laden trailer behind it – something it had done since leaving the UK by road almost a month before at the start of its journey to eastern mid-Norway. Far from the WOLF having disappeared from service, as some commentators would have us believe, this 20+ year veteran of exercises and operations is still pulling strong as part of Britain’s versatile Adaptable Force.

Next time I will look at the Defender 130 Battle Field Ambulance on TRJE18. 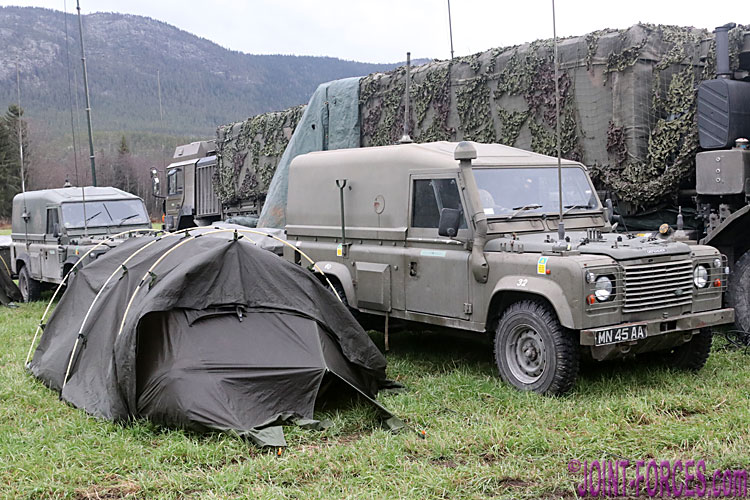 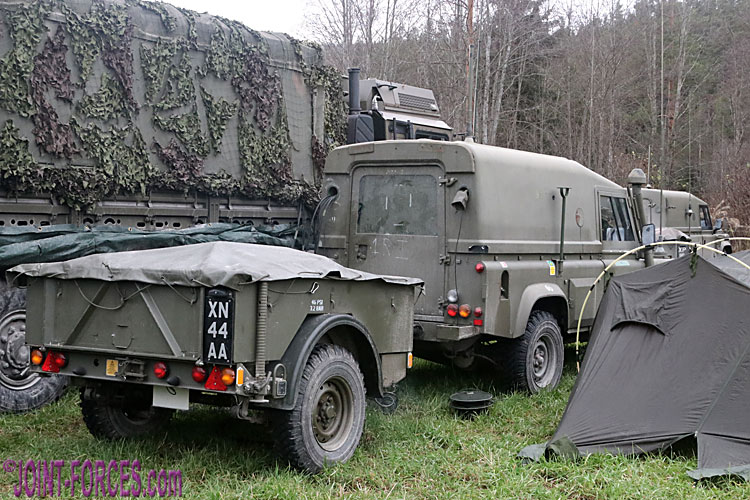 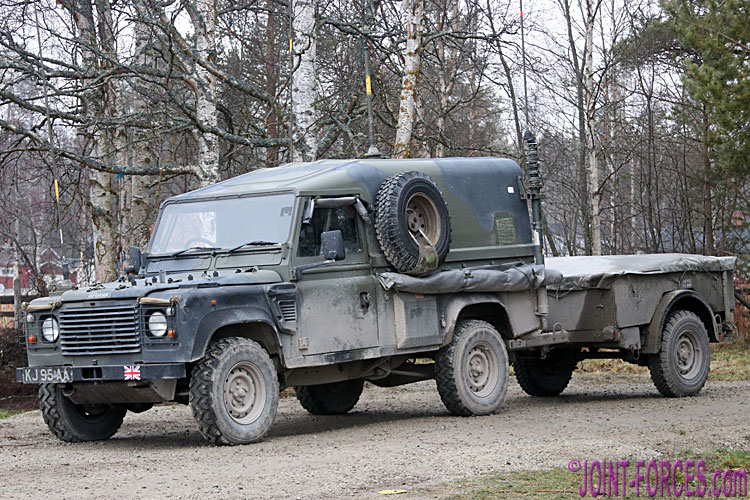 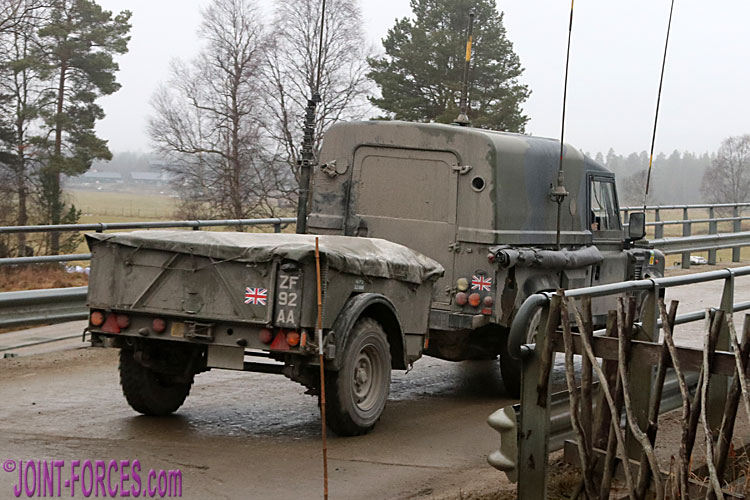 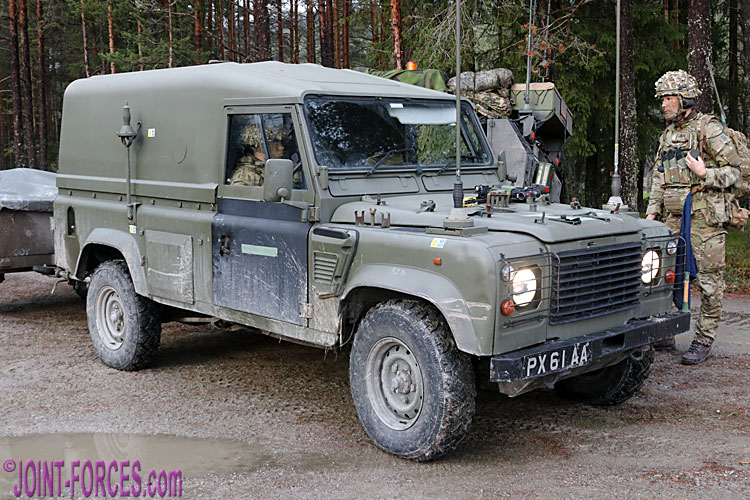 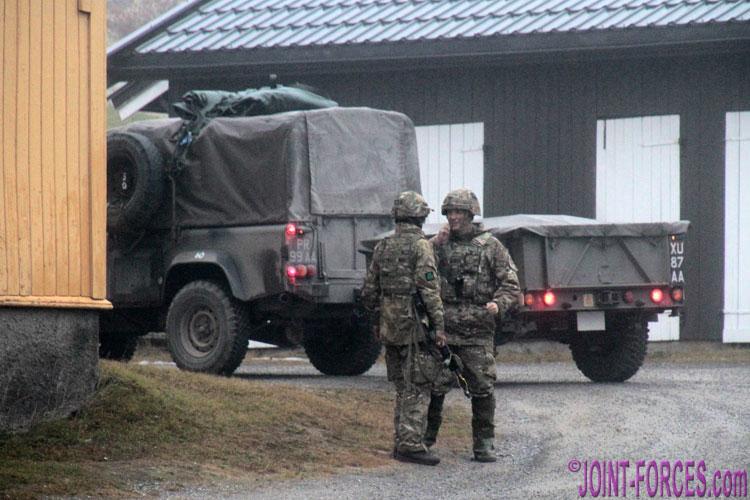 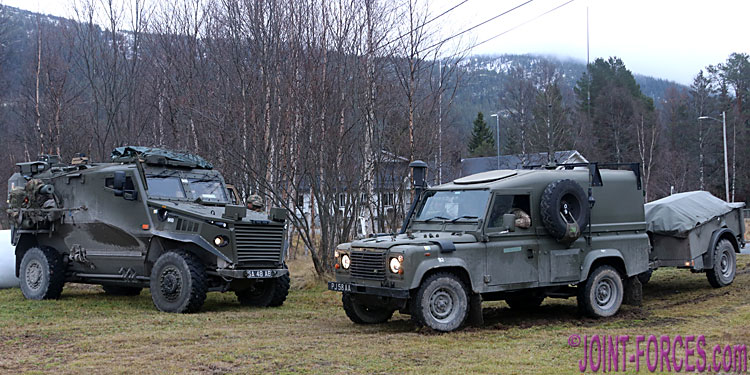