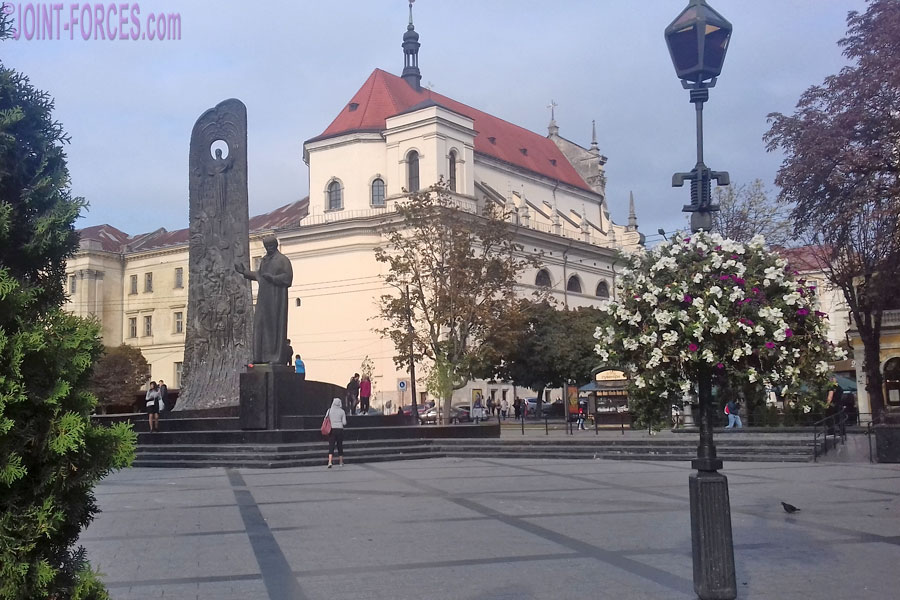 Lviv in Ukraine, with its historic Old Town and churches around every corner, is an architecturally interesting city to wander around yet maybe surprisingly is under three hours flying time from London [©BM]

In the not too distant past travel writer was a second string to my bow, as I penned and illustrated features for newsstand magazines on mostly Mediterranean and Middle East destinations, but as running and growing this website has taken up almost all of my time over the last four years it is a while since I put pen to paper, so to speak, on this topic. Both my daughter (Lynne) and my long term travel companion (Ramilla) have suggested that because I visit some rather diverse locations when on assignment I really should incorporate a regular travel section on Joint-Forces, but this seems unlikely for now unless I get an 8th day in the week and a 25th hour in the day.

Back to the latest UK government advice for a moment: Although for some time the FCDO, formerly FCO, has advised against travel to the region in the far east of Ukraine where the Russian Federation has been supporting an armed insurrection since 2014, and to the Crimean Peninsula down south into which the Kremlin sent troops to illegally occupy and annex the territory slightly earlier in the same year, visiting the bulk of the remainder of the country was not an issue. However, with an estimated 150,000 Russian troops now on manoeuvres in both Western Russia and Belarus (including by the Federation’s own admission thousands brought in from east of the Urals) forming a threatening an arc around Ukraine all the signs point to possible further Russian expansionism into its neighbour. It is therefore unsurprising that the UK FCDO felt it had little alternative but to change its travel advice.

Ukraine might not be the top of everyone’s travel wish list, though the former KGB lieutenant colonel who has been either President or Prime Minister of Russia since the end of the last century seems very keen to send his troops in there, but over the last few years the country next door to south-east Poland has increasingly attracted Western European tourists looking for more than a just a sunny beach for a short break. At just three hours or so from London Stansted airport, regularly served by budget airline RyanAir, both the capital city Kiev / Kyiv and country’s largest city in the west, Lviv, are interesting and inexpensive destinations for the adventurous traveller who likes exploring different places, cultures and cuisines.

On an autumn 2019 visit to Western Ukraine to cover Exercise RAPID TRIDENT at the International Peacekeeping and Security Centre (IPSC) near Yavoriv, about an hour’s drive west of the historic city of Lviv, because there were few hotels near the training area itself and as my hosts offered to drive me to and from IPSC each day, I opted to stay in the heart of the old city centre. As a result I was able to wander around in the evenings before and after dinner, taken in one of the many reasonably priced restaurants, and as I had a spare day at the end of the trip before my flight home I was also able to see the Lviv in daylight and take a few snaps on my phone while strolling around.

My one enduring memory of Lviv Old Town, in addition to its predominantly Austro-Hungarian and Polish architecture, was its friendly and Bohemian atmosphere with live music in many bars and restaurants and street performances almost around every corner. I was there about a week after the autumnal equinox, so the thermometer dropped quite quickly after dusk, but during the day it was pleasantly warm in the bright sunshine. Average daily high in September is around 19°C and night-time low is around 9°C, but from June to August both are around 5°C higher. In fact I was so taken with the city that I planned to take a long weekend break there with Ramilla early in the following summer, once the bulk of the scheduled US Army DEFENDER Europe 2020 exercises were complete….. but then that pesky pandemic upset the apple cart.

It had been my hope to travel out to this intriguing city again for a short break once a jam-packed work diary for this June was clear but unfortunately the perilous situation in the region, generated by a Kremlin which seems to have difficulty comprehending the concepts of self-determination and democracy for its neighbours, is making this now look a bit unlikely. I just hope that next time I visit Rynok Square, the Arsenal Museum and the Italian Courtyard I am accompanied by a pretty companion rather than peering out under the brim of my Revision Battlskin combat helmet.

Hopefully the accompanying photos, which I must stress are just cameraphone snaps taken to show Lynne and Ramilla where I had been, will give you some idea of what Lviv, and Ukraine, has to offer… if it is allowed to do its own thing by its expansionist neighbour to the east.

Featured, JUST LVIV IT, Lviv, travel, Ukraine
You may also like