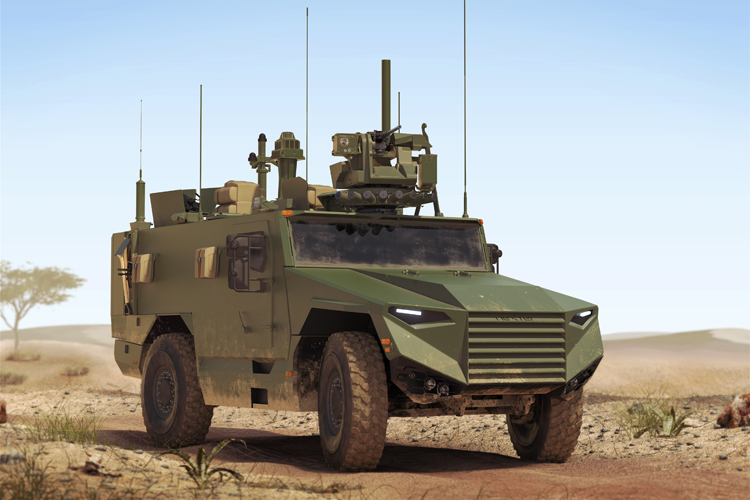 Nexter, a KNDS company, European leader in land defence, will be present at the SIAE (Paris Air Show) from June 17-23 2019 in Paris – Le Bourget, France.

Press release, Satory, 17 June 2019: Architect and system integrator, Nexter will showcase its know-how by proposing solutions and equipment that meet the needs in weapons and ammunition of air and airland forces. The SIAE [Paris Air Show] is a major international event dedicated to civil and military aeronautical technologies. For this 2019 edition, 320,000 visitors, 290 official visits from 98 countries and more than 3,450 accredited journalists are expected.

French leader in land defence and partner of the three armed forces, Nexter offers modular, reliable and innovative solutions that meet the operational requirements of its customers. The group has a product range going from armoured vehicles to artillery systems and also masters strategic subsets, such as weapon systems and ammunition or embedded electronic systems.

Through the development of new armoured vehicles VBMR-GRIFFON (in production), EBRC-JAGUAR, VBMR Léger-SERVAL, the renovation of LECLERC tanks and the maturation of technologies of the future, Nexter is fully mobilised to meet the challenges of the SCORPION programme. The confidence granted to Nexter by the Belgian government under the CaMo program (order of 382 VBMR-GRIFFON and 60 EBRC-JAGUAR) confirms the excellence of SCORPION systems. CaMo is also an opportunity to salute the relevance of the Government Partnership Agreement between France and Belgium, which comes into force just two years after the launch of the acquisition procedure, announced during the previous edition of SIAE.

Nexter is also a reference in the field of artillery and ammunition: the group has a wide range of ammunition ranging from 20mm to 155mm shells and is currently preparing the delivery of 19 CAESAR 8×8 self-propelled guns to the Danish Army.

Nexter is a key player in the aeronautical and airland world. Its airborne guns equip the Rafale multirole fighter, the TIGRE attack helicopter, as well as other aircrafts serving in both French and foreign armies. The group also produces all types of air ammunition and provides the Ariane rockets’ slappers (opto-pyrotechnic detonators), which allow the release of different stages of the rocket.

Products showcased at SIAE 2019 : Nexter presents on its stand its range of air products. The 20M621 20mm gun is thus available in a turret mount with the THL20, in a helipad mount for helicopters with the SH20, and in a POD mount for helicopters and light aircraft with the NC621. Regarding the 30mm range, the TIGRE helicopter’s THL30 turret and the 30M791 gun (mounted on the Rafale) are on display. Nexter presents a selection of its range of medium calibre ammunition adapted to air forces needs. With these different solutions, Nexter brings the superior firepower of 20mm guns to platforms previously limited to smaller calibres, as well as the unmatched efficiency of its 30mm cannons and ammunition.

At last, Nexter is displaying on its stand models of its range of land vehicles such as ERBC-JAGUAR, VBMR GRIFFON, LECLERC XLR and VBMR Léger – SERVAL.