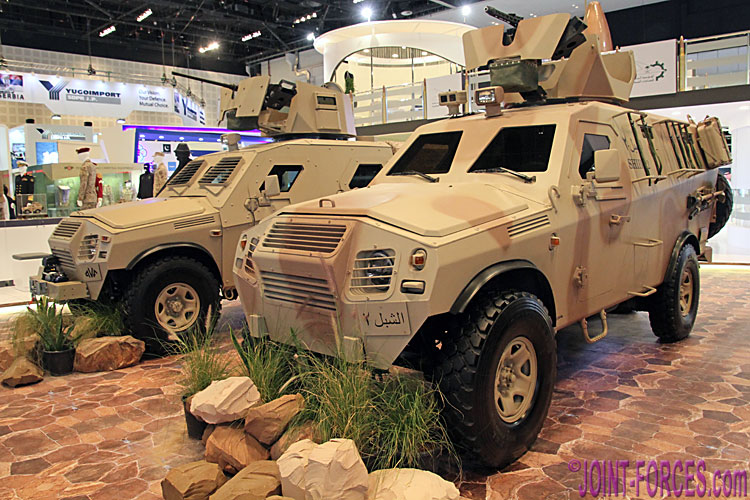 Located in Dammam, the major Persian Gulf port and capital of the Eastern Province of Saudi Arabia, AVF was originally established to modernise the Royal Saudi Land Forces’ armoured vehicle fleet of Panhard AML-90 scout cars and M3 APCs but for over a decade it has been manufacturing a range of its own vehicles as well as up-armouring light softskin trucks. The company has, according to its own publicity material, produced a number of different vehicles for both the Saudi Armed and Security Forces, in addition to those of some other Gulf countries, though these are seldom seen outside the Arab world.

I first came across AVF in 2017 at IDEX, the biennial International Defence Expo held in Abu Dhabi, and caught up with the company again at the inaugural EDEX in Cairo last December. At IDEX17 we were able to snap three vehicles, a SHIBL-2 which translates as LION CUB Mk.2, an APV-2 or Armoured Patrol Vehicle Mk.2 variant, and a TUWAIQ-2 (which is named after the massive Jabal Tuwaiq escarpment to the east of Riyadh). At EDEX18 we photographed two variants of the APV-2, a four-door version with rear cargo area and a new six-door version with full-length body allowing two additional troops to be carried, plus a TUWAIQ-2 Mine-Resistant Armour-Protected vehicle or MRAP.

In addition to producing a number of softskin 4×4 light truck conversions on a Toyota chassis, including both utility vehicle and recoilless rifle variants, the company also manufactured an armoured two-door pick-up truck on an earlier model chassis from the same Japanese company; this was known originally as the APV but is now reclassified APV-1. From the rear of the two-man cab forward this vehicle had a similar shape to the APV-2, but outer body armour panels on the vehicle displayed at IDEX gave the APV-1 the appearance of being bolted construction rather than welded and the gunner who manned the turret-mounted top cover machine gun positioned over the forward portion of the load bed was protected by what appeared to be relatively rudimentary design housing with flat roof and side armour panels. Company literature stated modular armour and glazing of the crew cabin and rear deck station corresponded to FB7 (CEN1063) ballistic protection level while the engine bay section corresponded to FB6 (CEN 1063). The APV-1 was powered by a 230HP V-6 engine and had a gross vehicle weight of 4.2 tonnes.

The SHIBL-2 spotted at IDEX17 is a stretched version of the original four-man SHIBL-1 and, like its smaller sibling, has just two cab doors but its armour extends the full length of the chassis and there are double doors at the rear for the (up to) seven dismounts to use. This compact seven-man personnel carrier, which in some ways is visually similar to the angular Land Rover-based NORLAND APC prototype produced by Northern Ireland Sheet Metal around the cusp of the millennium, has an all-welded body giving protection to FB6 level and a machine gun turret on the hull roof at the forward end of the troop compartment; alternatively, a Remote Weapon Station can be fitted at the manufacturing stage. According to the manufacturer this vehicle, which I suspect is also built on a Toyota chassis, was powered by a 221HP six-cylinder engine. Dimensions given are 5010mm long for the 3180mm wheelbase version and 3904mm for the shorter SHIBL-1, with both measuring 1760mm wide but no height is given.

The smallish four-door, five-seat vehicle alongside the SHIBL-2 at IDEX17 was a four-door APV-2 and it too had a machine gun turret, but the design of this was more sophisticated than the other vehicle’s and offered more protection to the gunner plus it even had side vision blocks. This APV-2 also had a thin skin of spaced appliqué armour. It’s rear cargo compartment was square-backed and covered by a fabric canopy. I suspect this patrol vehicle might have been a prototype. Also built on a 3,180mm wheelbase, the APV-2 measures 5180mm long and is also 1760mm wide with height to top of hull roof quoted as being 2085mm. Approach and departure angles are 60 and 28 degrees respectively and ground clearance is 270mm. According to 2017 company literature, the vehicle can achieve a road speed of 110km/hr and is powered by a 4.5-litre 203hp V-8 engine. Gross Vehicle Weight is slightly higher at 4.5 tonnes.

The body of four-door APV-2 armoured pick-up displayed at EDEX18 not only looked more refined than the earlier version spotted at IDEX17 but also had a higher sit suggesting to me it might be on a Toyota Hilux rather than 70-series Land Cruiser chassis, but I have not been able to confirm this. This vehicle had an open rear cargo bed with sloping tubular roll cage and there was a firing port in the rear cab face as well as one under each side window. The six-door personnel carrier version alongside it was almost identical, other than having a full length body and twin rear doors. Both vehicles had machine gun turrets, of slightly different design. I was unable to pick up any dimensions for these, but there is a chance I may be able to ascertain them over the next six weeks or so and if I do I will update this article.

The third AVF vehicle displayed at EDEX18 was a TUWAIQ-2 MRAP with 12.7mm heavy machine gun turret, but a Remote Weapon Station can be supplied instead. Constructed on the well-proven Unimog 500 military chassis, this 10-seat (including driver and commander) vehicle has a V-shaped hull and blast-suppressed seats; precise protection level is not quoted by the manufacturer and is just said to be “high”. The vehicle measures 6590mm long by 2680mm wide, but no height is given. Approach and departure angles are 45 and 35 degrees respectively, ground clearance is 560mm, step height is 500mm, fording depth is 1200mm and a 600mm wide trench can be crossed. The GVW is 14,500kg and the six-cylinder turbo diesel gives a top road speed of 100km/hr; there are eight forward and six reverse gears.

Footnote: At time of writing I have not yet been able to find pictures of the AVF TUWAIQ-2 in service but the Saudi Ministry of Defence has issued the above image of a SpecOps squad with what is clearly an AVF SHIBL-2 behind them. Inside the rear compartment of the mine-resistant TUWAIQ-2 up to ten troops, though six is more usual, sit on blast-suppressed seats [©BM]