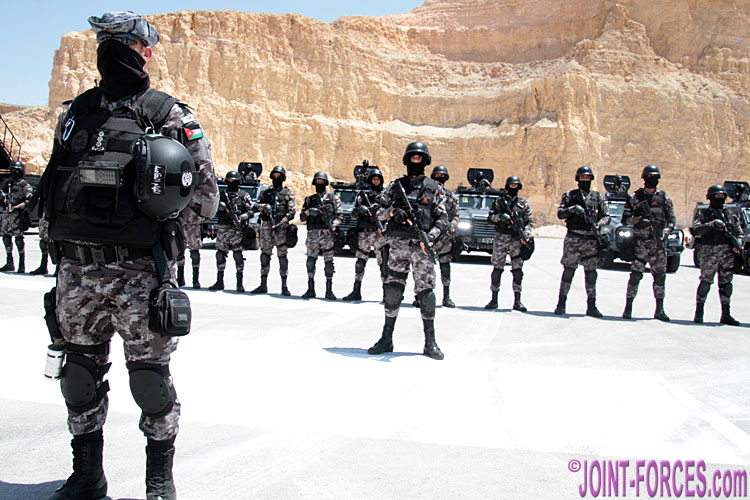 During the Opening Ceremony at the 10th Annual Warrior Competition at KASOTC (King Abdullah II Special Operations Training Center), Jordan’s elite Special Operations Forces undertook a series of dynamic demonstrations with the third of these being by the Gendarmerie.

Jordan’s fourth armed force, the Gendarmerie has existed since the formation of the nation following World War II and in 2008 it was expanded by Royal Decree into the General Directorate of Gendarmerie; the 10th Anniversary of the GDG, known as Darak in Arabic, is 10th July 2018. Part of the Jordanian Security Forces but under command of the Ministry of the Interior rather than the Ministry of Defence, the Gendarmerie mission is to “perform a major role in maintaining security and order through applying the best practices utilising human recourse and comprehensive knowledge which provide high degree of security and assurance for both citizens and residents” in a generally tranquil nation which lies in one of the most volatile regions of the world.

In addition to a headquarters and training establishment plus three regional formations in the north, centre and south of the country, each comprising three units roughly equating to battalions in army terms, Darak also has efficient Special Operations and SWAT components; from time to time these have been described as Unit 14 and Unit 30, but as with many SpecOps units public details are kept deliberately sketchy. However one official source states Unit 14 is the Gendarmerie Special Operations component “charged with responding to high-risk terrorist and criminal detection and interdiction, protection of national leadership, hostage negotiations, sniper incidents, hostage rescue, and execution of high-risk search warrants”.

The Gendarmerie in general is well-equipped with weapons, armoured vehicles of several types – including the homegrown Al-Jawad in various marks and former British Army Saxon APCs – and uniforms in its own distinctive KAII Urban Digital grey camouflage pattern. Camera-shy, but like most Jordanians usually very friendly to visitors, conventional units can sometimes be seen discreetly guarding approaches to locations popular with tourists, particularly Holy Land sites and the Jordan Valley, and patrolling border regions with the country’s more volatile neighbours, but their elite Special Operations units are naturally more secretive.

In the dynamic display at the start of the KASOTC 10th AWC opening ceremony a Gendarmerie SpecOps platoon responded to a major insurgent attack which followed on after the KAII Special Operation Forces Group had taken down the aircraft hijackers. As this was a full-on live-fire demo with hundreds of rounds being expended to obliterate banks of targets on two of the firing ranges we were only allowed to photograph the action from a ground level vantage point well over 100 metres away (and with all that lead going down range against a hard backstop this was understandable) but at the end of the ceremony we were able to get in closer as the operators lined up alongside SOFG Special Units before departing.

Both the Gendarmerie and the SOFG Special Units entered teams into the week-long competition that followed the dynamic displays… but that is a story for another day. A 5.56mm or 7.62mm machine gun can be mounted in front of the rotating roof hatch – an armoured cupola can also be fitted [© Bob Morrison] Photographed after the display, these are believed to be the latest Mk.4 version of Al-Jawad offering B6 level armoured protection [© Bob Morrison]