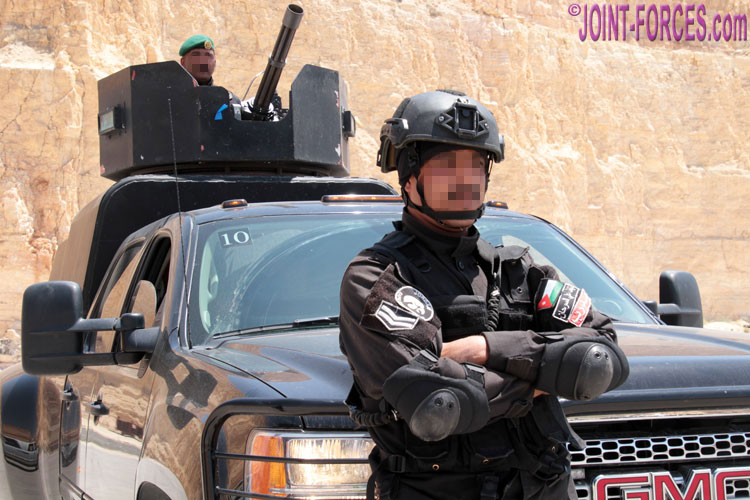 The Special Operations part of the ceremony commenced with a precision HALO (High Altitude Low Opening) parachute jump by a squad of Special Forces operators who landed on the parade ground directly in front of the grandstand, with the A300 Airbus and airfield control tower used for hijack scenarios as a backdrop. As always at KASOTC, the Jordanian SF jumpers landed with pinpoint accuracy in the centre of the arena despite the challenges of landing in the deep stone quarry which houses the training facility.

The first of three Jordanian Special Operations Forces formations to display their prowess consisted of a Counter Attack Team (CAT) backed up by a Rapid Reaction Team (RRT) who gave a demonstration of anti-hijack drills while protecting a VIP and the suppression of multiple hostiles by both plain clothes and uniformed operatives. Live ammunition was used throughout in a spectacular display of shock & awe tactics conducted on a quarry shooting range a little over 100 metres from the grandstand.

This whole demonstration, from the three-car convoy with VIP in the centre vehicle racing onto the parade ground to the supporting GMC gunship departing after all targets had been suppressed and all operatives had left the arena, took just seventy seconds. I later checked timings on my camera to confirm just how fast this drill had been and from the shot here of the operatives exiting the lead vehicle in response to the IED attack through to the shot of the gunship departing took just 61 seconds!

The three saloons and the SUV used for this display were just training vehicles but normally on a live operation the CAT would use a fleet of dedicated black vehicles for ceremonial occasions or nondescript armoured saloons and SUVs for low profile missions. The gunship with 7.62mm minigun was a GMC Sierra SLE 3500HD model with twin rear wheels and upgraded suspension.

If wearing combat uniforms, as opposed to black suits when in plain clothes, CAT and RRT operatives dress in black flame-retardant coveralls with black load carriage vests and black helmets (though berets are green). Main insignia consists of a white eagle’s head on a round patch with white lettering and white parachute wings, plus I also spotted a couple of Military Police patches being worn. The GMC gunship with 7.62mm minigun is a force multiplier [© Bob Morrison] The next photo feature from KASOTC will be on the aircraft take-down by a combined counter-terrorist force from Special Units 1 and 2.
Share