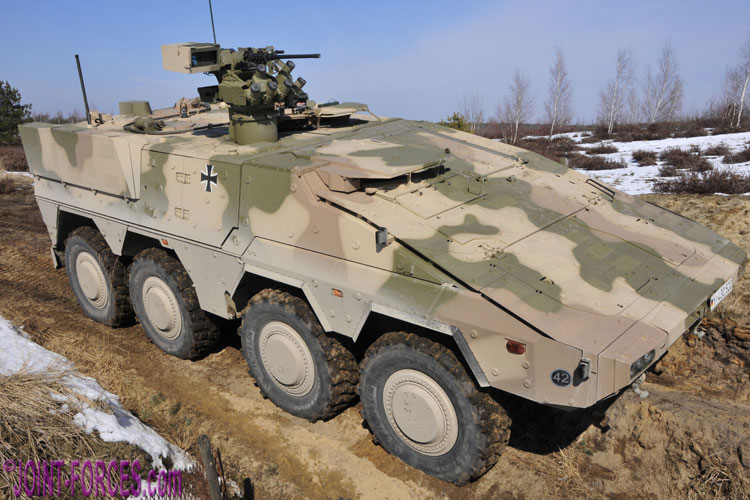 In this second part of the Boxer Story, Carl Schulze looks back to the Multi-Role Armoured Vehicle’s Cold War roots.

While the GTK Boxer MRAV belongs to the latest generation of wheeled armour, this vehicle which was designed under a modular philosophy can trace its roots back to the 1980s and the last decade of the Cold War. Up to that time it was believed in the world of military vehicles designers and developers that building of an efficient wheeled combat vehicle with a weight of over 20 tons was not viable. However the Experimental fahrzeug 8×8 (EXF 8×8) prototype built by the Mercedes-Benz AG in 1986, at the request of the Bundeswehr, proved the opposite. 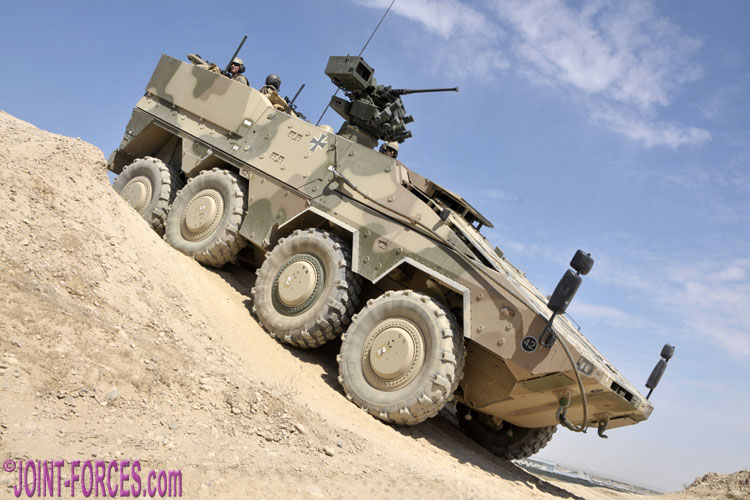 The vehicle, which weighed 32 tonnes and featured a Leopard 1 A3 turret with a 105mm rifled tank gun, incorporated state-of-the-art suspension and chassis technology that was twinned with new tyre technology and a central tyre inflation system. During trials conducted by the Wehrtechnische Dienststelle 41 (WTD 41) in Trier, the EXF 8×8 was found to offer equal capabilities to tracked vehicles in the field of off-road mobility and cross country travelling speed. The trials conducted with the vehicle generated vital data for future wheeled armoured fighting vehicle projects and benefited the later development of the GTK Boxer MRAV. 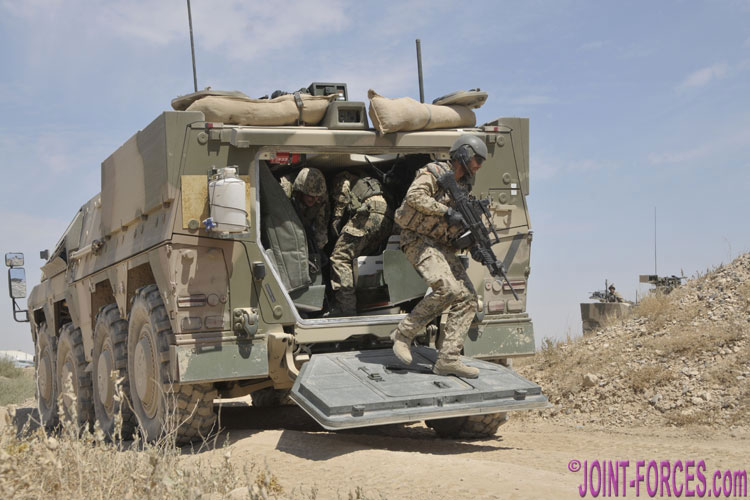 M113 and TPz 1 Fuchs Replacement
In the late 1980s the Bundeswehr began to look around for a replacement for its ageing fleet of M113 tracked APCs and Transportpanzer 1 Fuchs wheeled APCs. Following several studies it was finally decided to replace these vehicles with a wheeled personnel carrier which was given the designation Gepanzertes Transport Kraftfahrzeug (GTK), which translates literally in English as armoured transport vehicle. 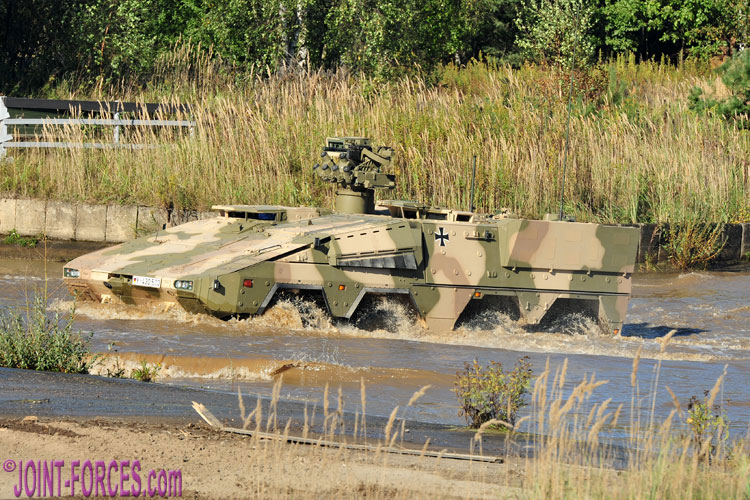 Without preparation the vehicle can ford water obstacles 1,200mm deep 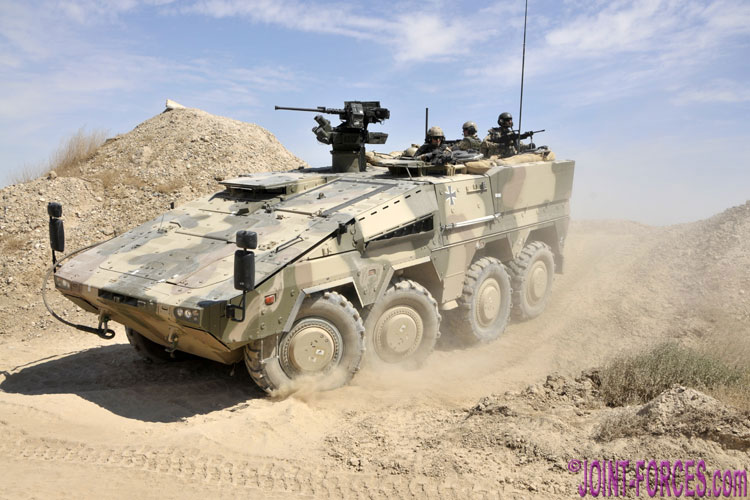 A Remote Controlled Weapon System is provided for self-defence

This was followed in January 1995 by the issuing of the tactical technical requirement for the vehicle, based on which the technical specifications were then established and two international consortia were invited to tender for the development and production contract for 200 of the new vehicles per nation. Team International included Henschel Wehrtechnik, Vickers Defence Systems, Alvis Plc and Panhard while ARGE GTK included Krauss Maffei, Wegmann, MaK, GKN Defence and GIAT. 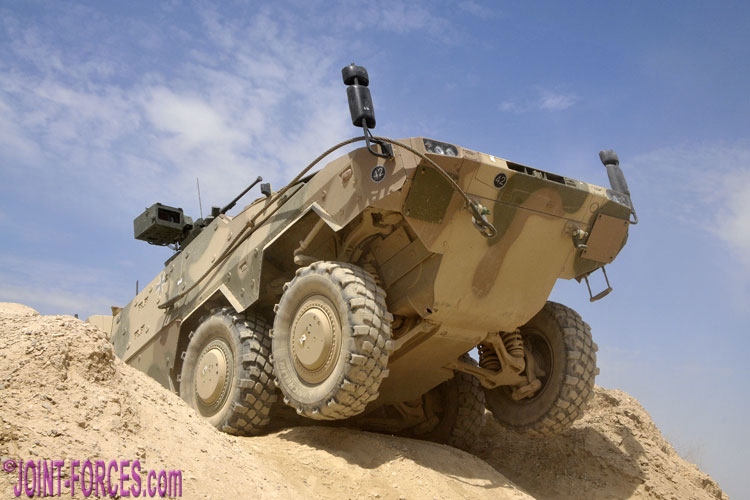 In July 1996 the United Kingdom officially joined the programme, looking for a replacement for its ageing fleet of FV432 APCs and other wheeled and tracked vehicles then in service. It was planned that the UK would procure about 600 plus vehicles.

During the same year, concept studies for a 6×6 and 8×8 vehicle were conducted, and in April 1997 the bids of the tendering consortia were placed. 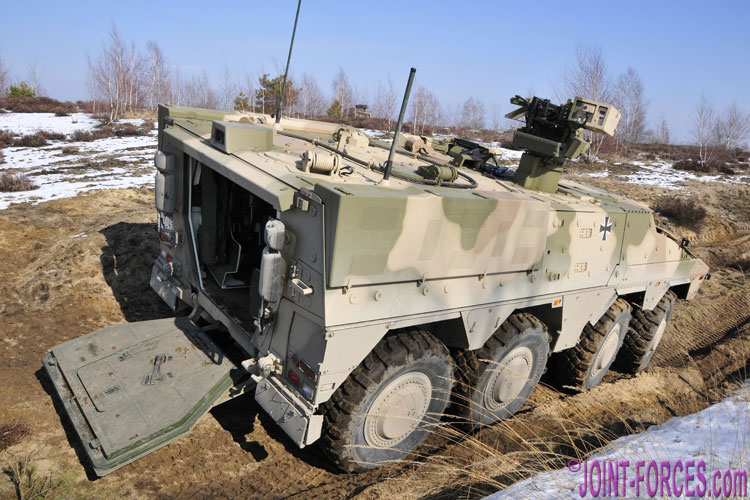 In April 1998 it was announced that the ARGE GTK consortium had been selected for the contract due to the facts that the 8×8 vehicle solution offered by it was seen as the more cost efficient solution, had a greater payload and interior volume and offered more growth potential. In the meantime ARGE GTK, using its its own funds, had built a 6×6 technology demonstrator.

On the German side fielding of the 6×6 vehicle was considered as a much cheaper alternative to fulfil the mission of about one third of the approximately 3,000 vehicles that it needed to procured, so further development in this direction was conducted nationally, but the project was eventually terminated. 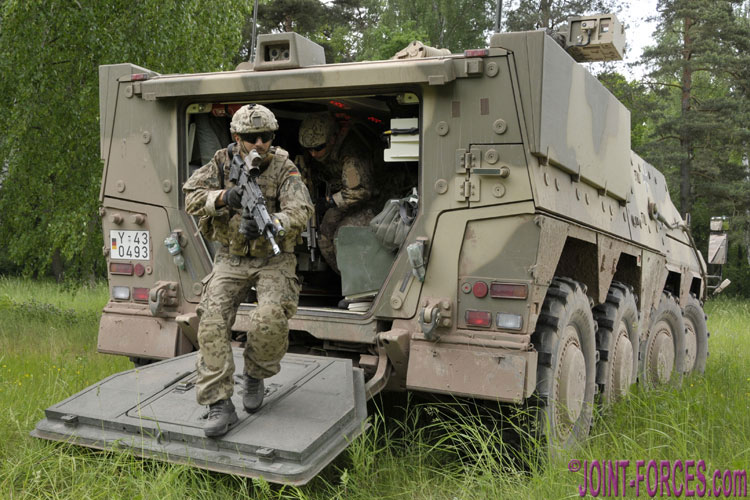