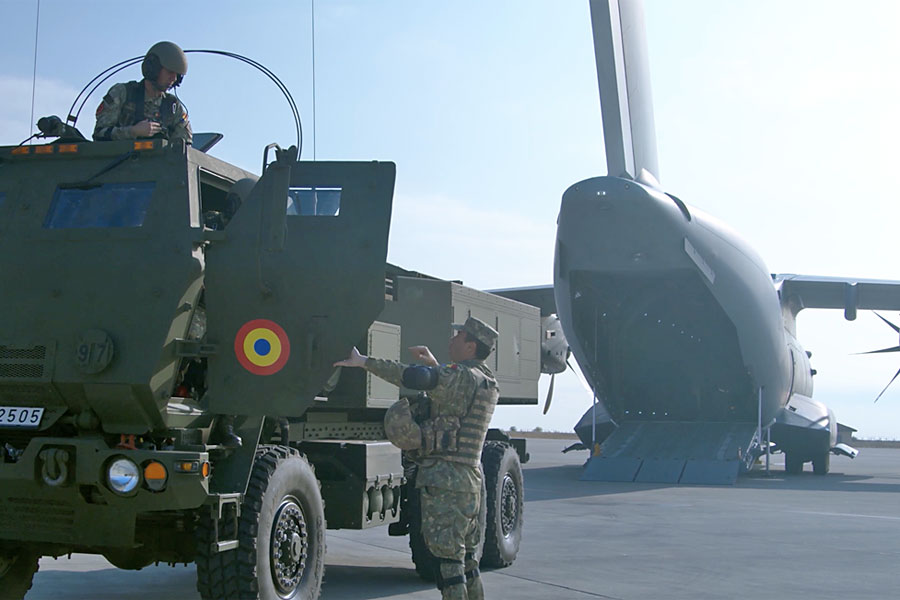 Britain’s RAF has flown a US HIMARS (High Mobility Artillery Rocket System) from the UK to Romania by A400M during ATREUS 2022.

News Release, Brussels, 15 November 2022: Romanian soldiers have been getting familiar with the US HIMARS. The M142 High Mobility Artillery Rocket System, or HIMARS, was flown into Romania as part of an exercise to demonstrate how rapidly it can be deployed.

The UK’s Royal Air Force flew the HIMARS from the UK to Mihail Kogălniceanu International Airport in Constanța, on the south-eastern coast of Romania. The US-led exercise, called ATREUS, helped familiarise Romanian soldiers with the rocket launcher system, which gives NATO the ability to conduct powerful long-range precision strikes. ATREUS has also been taking place in Poland and Norway. In Romania, no live-firing was conducted. ATREUS ran from 7 to 11 November 2022.

This NATO Multimedia footage includes shots of a UK RAF transport plane landing, HIMARS rolling off and being driven around by Romanian soldiers as well as soundbites from Major General Iulian Berdilă, chief of the Romanian Land Forces.