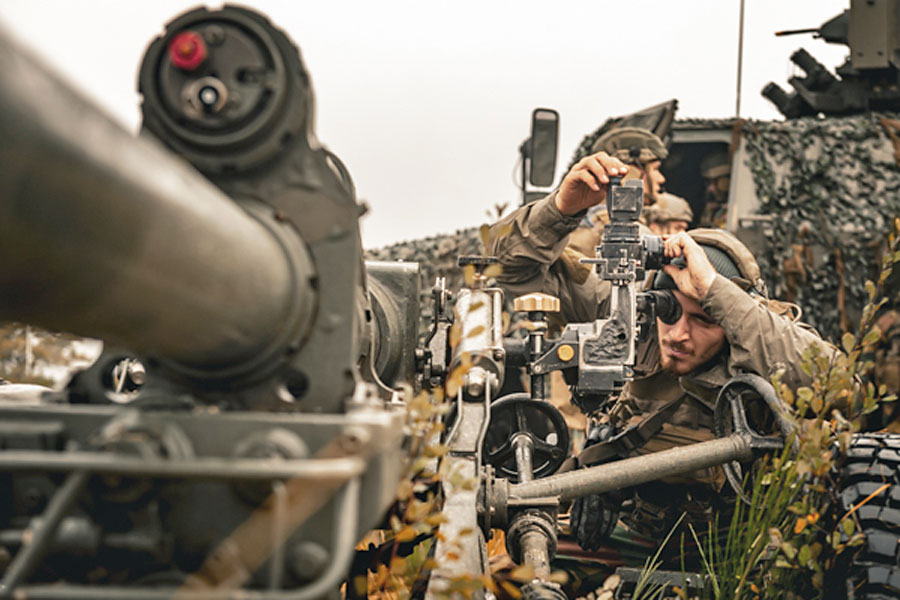 News Release, Brussels, 24 October 2022: [auto-translated] The Artillery Battalion organised an intensive training week, COMMON GUNNER, in the week of 17 to 21 October in the Camp of Elsenborn. This exercise is part of the preparation for the participation of NATO’s Very High Readiness Joint Task Force 23 (VJTF 23). On October 18, a live firing exercise was performed in the presence of the press.

The focus of the exercise was on training in a realistic operational environment where orders must be received, processed and executed correctly. They trained not only on contact with the enemy but also on medical incidents, logistical problems and learning how to survive with a minimum of materiel.

The Artillery Battery, two platoons with three guns each, were positioned in the field. The ammunition was primed, the Howitzers were aimed and six shells were fired in less than one minute. The cooperation and speed with which they worked was unimaginable. “Today we mainly train on the correct execution of the manipulations and the smooth and safe firing of grenades”, says Corps Commander Erik Verstraelen.

In order to introduce the young soldiers of the battalion to the challenge associated with activation, such an exercise was started in Brasschaat in the period from 10 to 15 October via an alarm procedure. While several incidents took place in collaboration with the police and fire brigade, among others, everyone had to be ready in five days for an administrative transfer to Camp Elsenborn, where they switched to a tactical manoeuvre.

The howitzer battery of the Artillery Battalion will form part of a multinational field artillery battalion, led by the Germans, for the third time from 1 January 2023, within the rapidly deployable brigade of the VJTF 23. This is part of the enhanced NATO Response Force 23. (eNRF 23). For one year, 123 Artillery soldiers with 60 vehicles will be ready to respond to a NATO call within five days. In total, just over 300 Belgian soldiers will be on call.