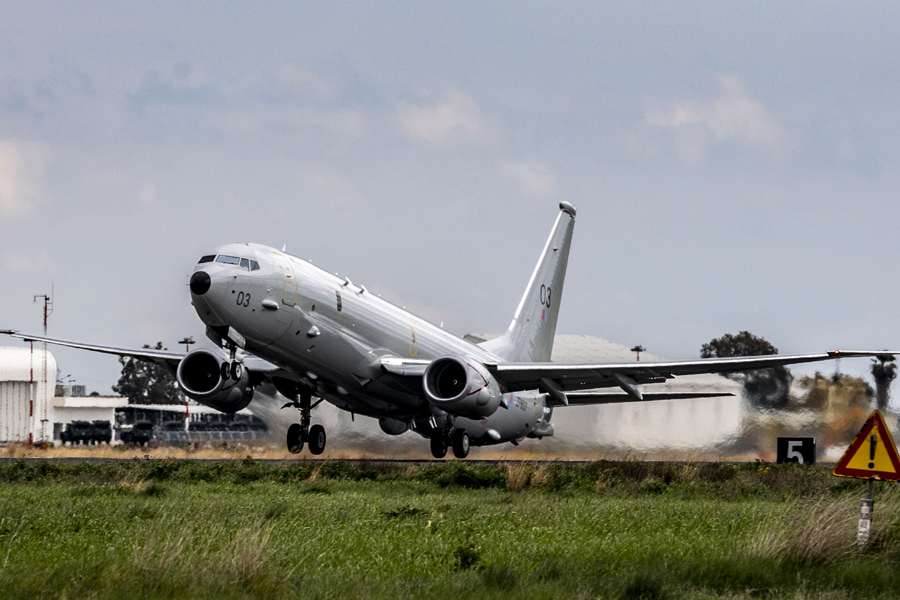 Royal Navy News Release, 05 March 2022: The UK’s anti-submarine forces took their skills to the next level during the largest workout in the Mediterranean.

For the first time two RAF Poseidon Maritime Patrol Aircraft from CXX Squadron based at RAF Lossiemouth joined the Royal Navy for NATO’s DYNAMIC MANTA, two weeks of cutting-edge tech and training involving seven Allied nations in the vanguard of underwater warfare. In service since 2020, the Poseidon MRA1 has concentrated its training and operations in waters around the UK to date.

Detachment commander Squadron Leader Pete Surtees said crews welcomed the variety of the combined training with numerous NATO allies off the coast of Sicily as the exercise tested individual skills and enhanced collective effectiveness. “The momentum is really building,” he said. “We’ve taken Poseidon Force from securing the seas around the UK to operating overseas in support of a very complex exercise.

“It’s providing great training opportunities and moving the capability forwards, we’re really back to where we need to be.”

The Poseidon MRA1 is designed to carry out extended surveillance missions at both high and low altitudes. It’s equipped with cutting-edge sensors which uses high-resolution area mapping to find possible threats on or beneath the waves. Poseidon can also drop sonobuoys which sit in the ocean and ‘listen’ for submarines.

814 Naval Air Squadron from RNAS Culdrose in Cornwall also dispatched a Merlin Mark 2 helicopter to Sigonella airbase near Catania. From there, they launched regular patrols over the exercise area in the Ionian Sea. “Using our powerful dipping sonar, we were able to rapidly move across large distances to locate and track submarines that were attempting to target the task force,” said Merlin pilot Lieutenant Dominic Raeyen.

“Working alongside the RAF P-8 Poseidon maritime patrol aircraft as well as multiple other military patrol ships and anti-submarine warfare ships, this exercise has represented an invaluable opportunity to understand how different NATO nations operate, and the best training and procedures for joint operations.”

Canada, France, Greece, Spain, Turkey, the UK, and USA, plus hosts Italy committed ships, submarines and air power to DYNAMIC MANTA 2022. The long-running exercise is one of two NATO runs focusing on anti-submarine warfare; the other is held off Norway or Iceland to test forces in colder Atlantic waters.

At sea Royal Navy patrol ship HMS Trent acted as hunter and hunted with a NATO task group. Trent is a general duties warship, not specifically equipped for anti-submarine warfare unlike a Type 23 frigate but still able to play an important role in DYNAMIC MANTA, as Able Seaman Daniel Watters – an underwater warfare specialist – explained: “I was able to provide Trent with a greater understanding of submarine recognition and suggestions on how a submarine may act.

“There are many benefits Trent can bring to the NATO Task Group, such as acting as a ‘lily pad’ to refuel helicopters, acting as a decoy ship to confuse a submarine’s sonar picture or providing the task group with close-in security against small boat threats, allowing the frigates to continue their hunt for submarines.”

Each participating ship had the opportunity to conduct varied anti-submarine operations, while the submarines acted as both hunters and hunted, closely coordinating their efforts with the aircraft and surface vessels.