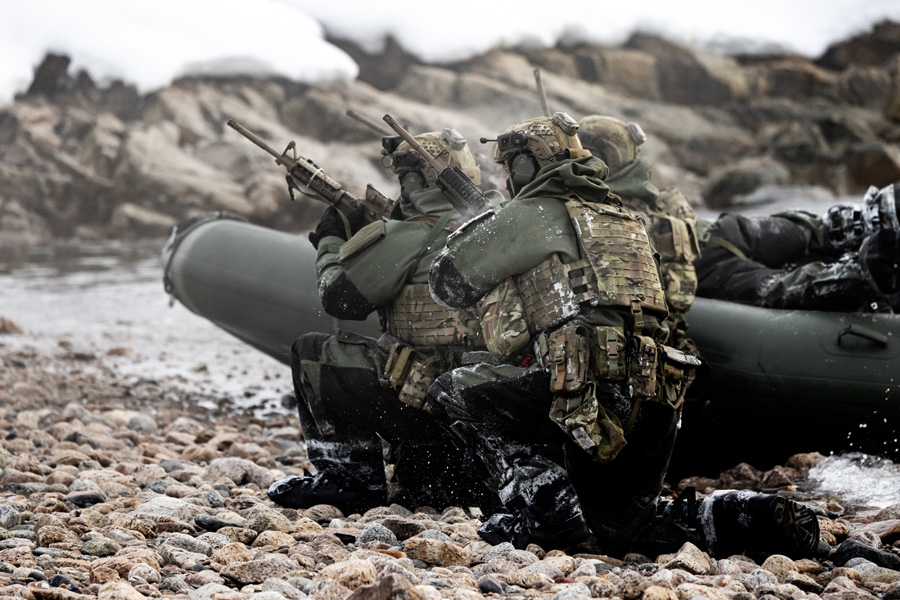 Royal Navy News Release, 02 March 2022: Royal Marines emerged from the freezing depths of an Arctic fjord during final preparations for the largest winter exercise in Norway for 30 years.

Expert teams from 30 Commando Information Exploitation Group swam ashore and used inflatable raiding boats, before studying their surroundings to carefully calculate the best place for troops to land and hit an adversary decisively. The commandos carried out this essential training in northern Norway to ensure that amphibious forces are able to access the rugged Arctic coastline when the Norwegian-led Exercise COLD RESPONSE begins in earnest next week alongside a galvanised NATO effort for peace and stability in Europe.

Around 35,000 troops from 28 nations are expected to be involved in COLD RESPONSE, which will show how a unified multilateral force would defend Norway and Europe’s northern flank from a modern adversary. Roughly 900 Royal Marines will spearhead the UK involvement, raiding along the rugged Norwegian coastline from an amphibious task group led by HMS Albion. Aircraft carrier HMS Prince of Wales will deploy to the exercise, with frigate HMS Richmond, Type 45 destroyer HMS Defender, a Royal Fleet Auxiliary tanker and a nuclear-powered attack submarine escorting her. UK Merlin and Wildcat helicopters will patrol the skies, supporting commando operations and hunting submarines alongside a wide range of aircraft from across NATO, including F-35 fighter jets and attack helicopters.

This participation in the exercises underlines the UK’s commitment to security in Europe and forges closer bonds between NATO allies and partners. Brigadier Rich Cantrill, in charge of the UK’s commando forces, said: “The UK is making a strong contribution to one of the largest COLD RESPONSE exercises for years.

“NATO as an alliance needs to be ready for anything, ready for all environments. It’s essential for us to support Norwegian partners and that’s why we train in the Arctic so often.

“COLD RESPONSE is an amazing opportunity for key NATO allies and partners to come together in the most challenging environment of the High North, prepare for any eventuality and learn to work together.

“What we’ll see is a strong maritime task force and then land exercises. We will see many nations come together from the UK to Norway, the USA, the Netherlands, France, Germany and Italy.”

The exercises – which run from March 10 to April 10 – will see allied forces, including from NATO partner nations Sweden and Finland, take control of the waters off Norway’s coastline in a training scenario designed to enhance the alliance’s ability to protect the host nation. Air operations will commence soon after that before the final phase will see amphibious landings and land operations. This is when the UK’s commandos will come into their own, raiding positions along the coast to pave the way for larger amphibious forces. Royal Marines have been in the Arctic since January perfecting extreme cold weather skills in surviving, moving, and fighting across the frozen landscape.

For the expert Surveillance and Reconnaissance Squadron, of which the Shore Reconnaissance Team (SRT) is a part, the deployment has allowed them to practise some of their key skills and worked with Norwegian counterparts based at Ramsund Naval Base. Having swum ashore, the SRT turned up the volume with live break contact drills on the icy beaches and snow-covered coastline of Ramsund which lies around two dozen miles west of Narvik.

The tactics practised allow the commandos to disengage quickly from an enemy and regain their covert posture. Electronic targets were sprung on the commandos without warning to simulate an overwhelming enemy force and the marines were tasked with breaking contact back to the beach and getting away using their fast inflatable raiding craft.