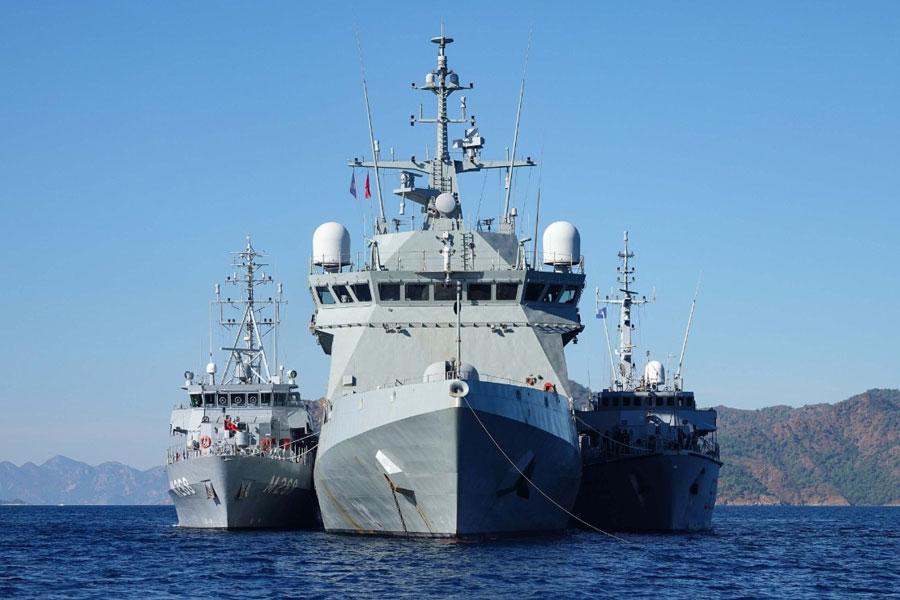 4000 men and women from nine allied and partner Navies, 21 naval units, 4 AV-8B aircraft and 17 embarked helicopters, including 2 combat helicopters of the Italian Army, 3 Italian submarines and several maritime patrol aircrafts were involved in the Exercise MARE APERTO 21. The focus of the Exercise MARE APERTO 21 was amphibious operations, to enable the certification of the Italian led Amphibious Task Force as part of NATO Response Force (NRF) 2022. During the exercise, training had covered all sectors of air-sea operations, from the projection of an amphibious force from the sea, to the fight against conventional and asymmetric threats with an increasing difficulty.

“Looking back on MARE APERTO 21, as the first major naval exercise involving Standing NATO Maritime Group Two during the second semester 2021, I am very pleased with the performance of my units and staff during the exercise. In particular at unit level, valuable combat readiness training was achieved,” said Rear Admiral Stefano RUSSO for the Exercise MARE APERTO 21.

Both Standing NATO Maritime Group Two (SNMG2) and Standing NATO Mine Countermeasures Group 2 (SNMCMG2) provided contribution to this multinational and multi threat Exercise DOGU AKDENIZ 21, together with 36 surface vessels, 3 submarines, 4 MPAs, 19 helicopters, 5 UAVs, amphibious troops and Special Forces teams between 01 and 12 November 2021. In accordance with an advanced and well-structured scenario, all units had the opportunity to train on maritime interdiction operations, conventional (air, naval, underwater and mine) and asymmetric threats, search and rescue operations as well as humanitarian assistance and disaster relief operations during the Exercise DOGU AKDENIZ 21.

“The Standing NATO Maritime Group 2 and Standing NATO Mine Countermeasures Group 2, as core part of NATO Response Force, could not miss this first big step of the evaluation process that will lead TURMARFOR to this highly prestigious duty of NRF Maritime Component Command in 2023” said Rear Admiral Stefano RUSSO, SNMG2 Force Commander.

The MARE APERTO 21 and DOGU AKDENIZ 21 exercises were opportunities for NATO to enhance combat readiness, enhance interoperability of all participant units and staffs, reinforce cohesion between Allies, and contributes to NATO’s presence and commitment to maritime security and collective defence.