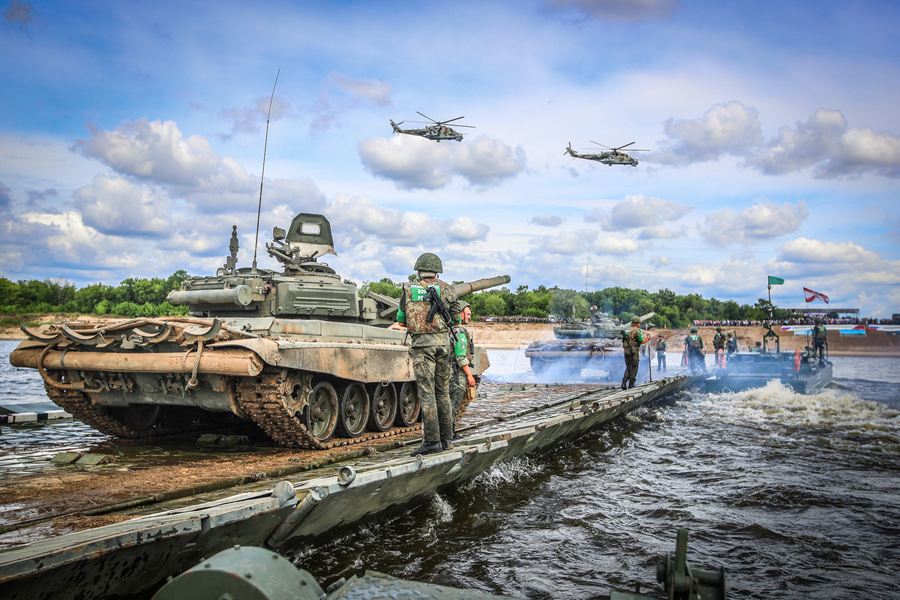 In the final of the competition at the Vantovy training ground on the Oka River, four best teams of pontoon-crossing units took part: the Western, Southern, Central military districts and the centrally subordinated pontoon formation from Murom. During the competition, pontoon-ferry units overcame the water obstacle at speed by forcing with the help of PTS-2 floating transporters and set up pontoon ferries using pontoon parks.

The competition was held in six stages. At the first stage, engineering reconnaissance was carried out, in which the sapper squad in an inflatable boat repelled the enemy’s attack, bypassing obstacles on the water and breaking the water obstacle, demining the opposite bank was carried out.

At the next stages, the teams carried out a landing crossing using the PTS-2 floating transporter and equipped ferry crossings using the PMM-2M ferry bridge machines. In the Final Stage, the teams equipped a platoon ferry and carried heavy military equipment.

As a result of the competition, the team of the 11th Separate Engineering Brigade of the Southern Military District won. The pontoon builders spent 41 minutes and 36 seconds to complete all competition tasks. In second place were representatives of the 28th pontoon-bridge brigade of central subordination, whose task completion time was 45 minutes 48 seconds. Participants from the 45th independent engineering brigade of the Western Military District closed the top three – it took them 46 minutes 18 seconds to complete the tasks.

The winners of the competition will represent the national team of the Armed Forces of the Russian Federation at the International stage of ARMY-2021, where they will meet with a team from the Republic of Belarus.