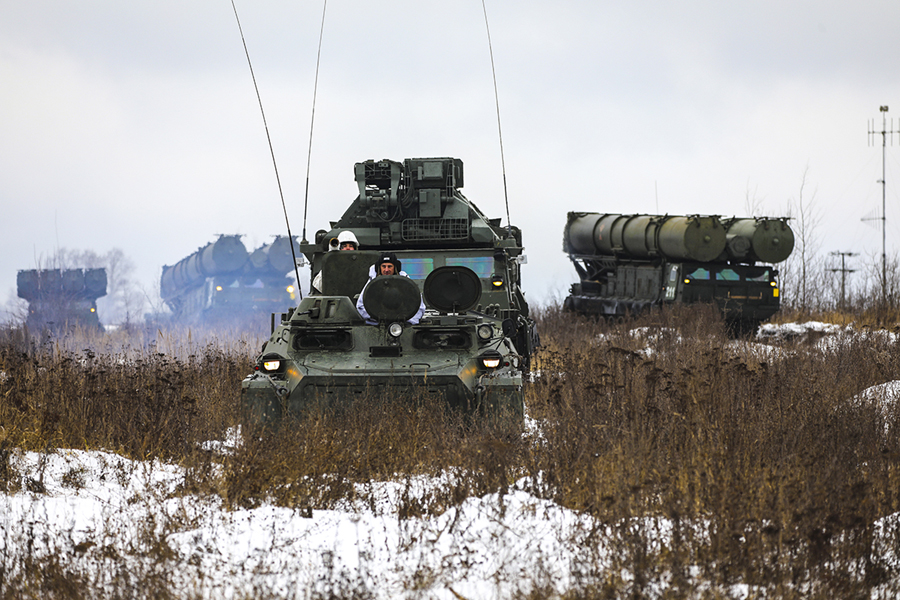 Russian air defence personnel of the Moscow and Volga Regions (Western and Central Military Districts) have been raised on a training alerts.

Press Release, 25 February 2021: [auto-translation] More than 500 servicemen of an independent anti-aircraft missile brigade of the air defence of the Western Military District were alerted in the Moscow region as part of a sudden check of the combat readiness of the air defence forces of the military district.

Upon receipt of the command to bring the brigade to an increased degree of combat readiness, the personnel received weapons in an organised manner and the equipment was prepared to perform tasks. After completing combat readiness, the S-300V anti-aircraft missile systems in convoys moved to the deployment areas in battle formation to perform combat training tasks and conduct electronic launches. In the course of the march, the subunits in a difficult tactical situation worked out introductions to repel the strikes of air attack means of a simulated enemy, to overcome difficult snow-covered and conventionally infected areas of the terrain, as well as the zones of action of conventional sabotage and reconnaissance groups. In the places of concentration, military engineers performed work on equipping fortifications and installing mine-explosive obstacles.

In total, more than 500 servicemen and over 100 units of weapons, military and special equipment took part in the check of combat readiness. The purpose of the combat readiness test is to improve the combat coordination of formations, military units and air defence subunits, as well as their readiness to repel enemy air strikes in a difficult air and jamming environment, to consolidate in practice the knowledge and skills gained by military personnel in fire control and firing at conventional targets.

Press Release, 26 February 2021: [auto-translation] In the Volga region, for the first time, the training of anti-aircraft gunners of the Central Military District was held with the involvement of two regiments equipped with S-400 Triumph anti-aircraft missile systems.

The exercise began with an alarm. Servicemen have successfully worked out a number of standards for the destruction of a massive missile attack of a simulated enemy at low, high and medium altitudes. The joint actions of the two regiments were worked out in order to develop interaction with the Samara anti-aircraft regiment, which in December 2020 was re-equipped with a new S-400 set.

Also, a distinctive feature of practical actions was the simultaneous widespread use of a number of the latest and most modern radar systems. For reconnaissance and target detection, the ‘Nebo-M‘, ‘Nebo-U‘ and ‘Kasta-22‘ systems were used. To detect and track low-signature air targets, the ‘Terek‘ mobile two-coordinate radar stations of a circular view of the metre wavelength range, as well as the upgraded ‘Desna‘ high and medium-altitude combat mode radar and ‘Oborona‘ radar for early detection and measurement of the azimuth of air targets were used. More than 500 personnel were involved in the exercise, about 100 pieces of equipment were involved.