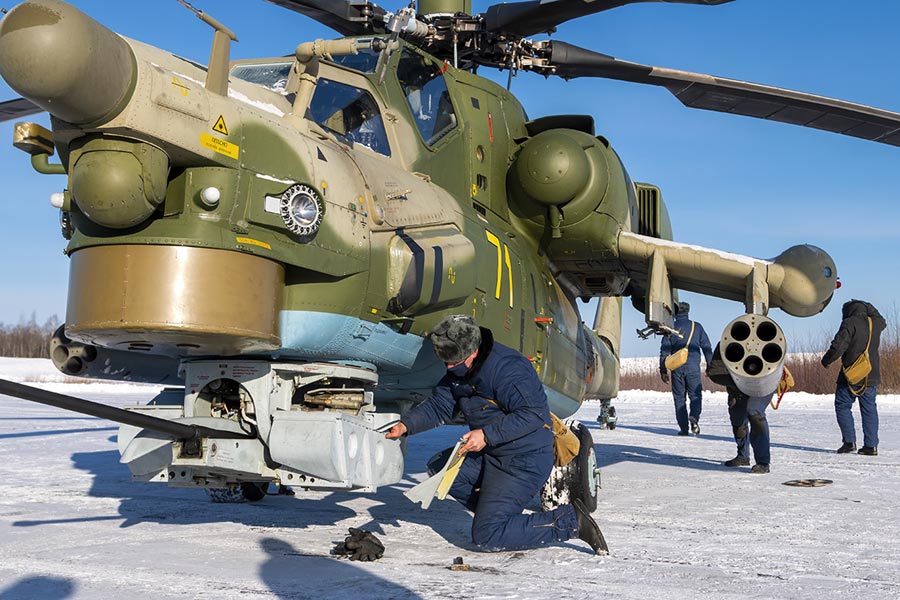 Russian ‘Night Hunters’ helicopters from the Pskov region recently destroyed a convoy of armoured vehicles with rocket fire at the firing range.

Russian Federation News Release, February 2021: [auto-translation] In the Pskov Region, the crews of the Army Aviation Brigade of the Leningrad Army of the Air Force and Air Defence of the Western Military District conducted tactical flight with the use of aviation weapons.

According to the plan of the exercise, the pilots of the Mi-8 multi-purpose helicopters, the Mi-35 and Mi-28N ‘Night Hunter’ attack helicopters moved to an operational airfield in the Leningrad Region. After refuelling, the crews moved to the area of the combat training missions to destroy the columns of automobile and armoured vehicles, as well as the accumulated of manpower of the notional enemy. Departures of combat vehicles to the aviation range were carried out singly and as part of tactical units. To destroy the ground forces and means of the ‘enemy’, unguided aircraft missiles S-13 and S-8, as well as automatic aircraft guns of 30 mm calibre, were used.

In total, more than 10 army aviation helicopters and more than 50 military flight crew and engineering personnel were involved in the exercise.