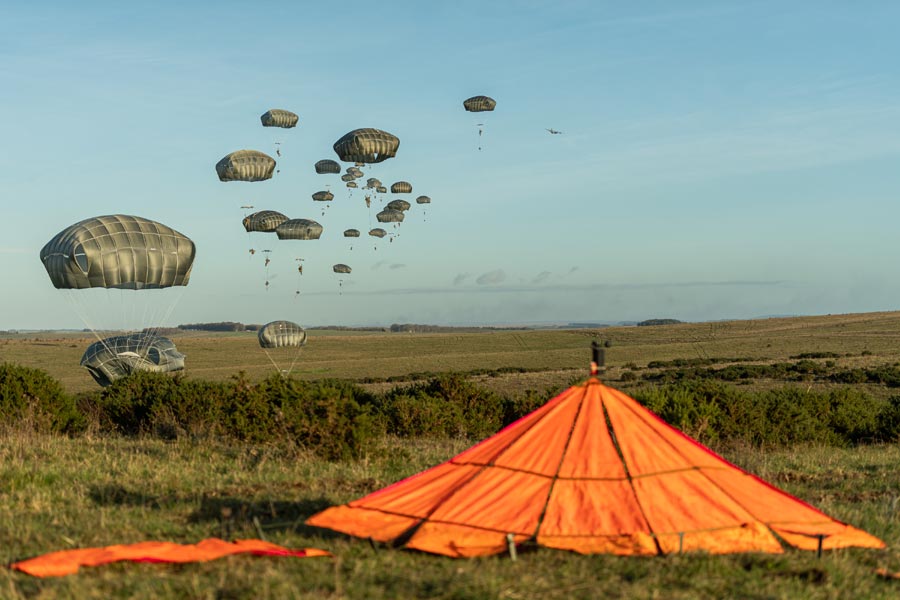 An Air Assault Battlegroup from the Anglo-French CJEF (Combined Joint Expeditionary Force) has been exercising on Salisbury Plain.

British Army News Release, 04 (distributed 05) December 2020: British, French and American paratroopers have given a powerful demonstration of how they can go side-by-side into battle by air.

Some 20 helicopters carried the 1,300-strong 2 PARA Battlegroup into action today (Fri 4 Dec) on Exercise WESSEX STORM. Mounting at Keevil airfield on Salisbury Plain, troops, vehicles and stores were lifted by Royal Air Force Chinook and Puma support helicopters, protected by the sensors and weapons of Army Air Corps Wildcat reconnaissance helicopters and Apache attack helicopters. The multinational force was dropped off to assault Imber village, capturing it to use as a base for further missions on the windswept training area.

The training is about confirming the 2 PARA Battlegroup’s skills and readiness to serve as the lead infantry unit within 16 Air Assault Brigade, the British Army’s global response force. Some 150 troops from the French 2e Régiment Etranger de Parachutistes and a 40-strong platoon from the US Army’s 2nd Battalion, 503rd Parachute Infantry Regiment are taking part. Their involvement is about growing understanding of each other’s capabilities and tactics, meaning our airborne forces are better prepared to operate together on future operations.

Today’s mission – the largest British-led air assault since Operation MOSHTARAK in Afghanistan in February 2010 – comes as the six-week long manoeuvres (2 Nov-12 Dec) reach their validation phase. The Battlegroup is being challenged to beat back the invasion of an ally by a hostile neighbour, fighting both conventional military units and militia-type forces. Before launching the air assault, troops had parachuted in to capture Keevil, with additional personnel, stores and vehicles delivered by RAF and French Armee de l’Air A400M transport aircraft.

The 2 PARA Battlegroup is built around the paratroopers of Colchester-based 2nd Battalion The Parachute Regiment, supported by signallers, engineers, artillery, medics and logistics specialists from 16 Air Assault Brigade. It is training to be ready to deploy at short notice on operations around the world.