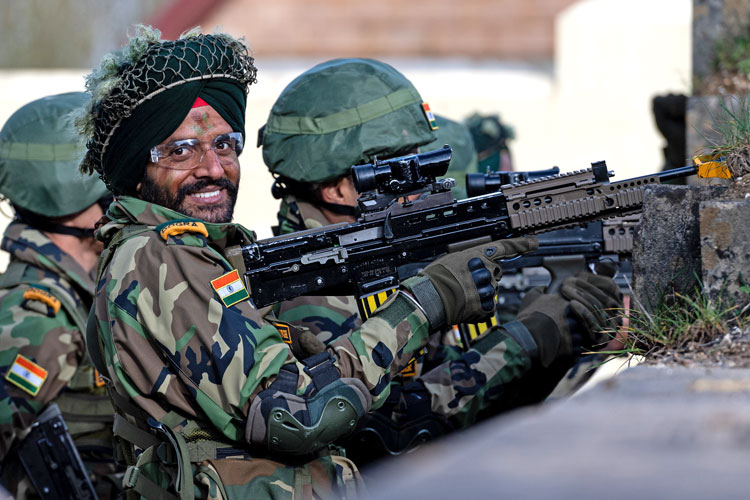 An Indian soldier smiles for the camera as he takes up a fire support position, ready for his platoon's assault onto a position during a joint British and Indian exercise [Crown Copyright: Cpl Rob Kane]

Indian soldiers have been in the UK to participate in joint Indian and British Army military training, Exercise AJEYA WARRIOR, held on Salisbury Plain.

UK 7th Infantry Brigade Release, 25 February 2020: The Exercise has seen a composite company of 120 soldiers from the Indian Army’s 14th Battalion, The Dogra Regiment and soldiers from B Company 1st Battalion The Rifles share their knowledge and expertise to enhance the combat tactics of both sides.

The two-week training event which took place on Salisbury Plain Training Area (SPTA) is held biannually in alternate countries, and culminated in a 72 hour joint counter-insurgency exercise in the middle of the plain. The Indian troops have participated in a series of familiarisation stands and lectures that have encompassed counter-improvised explosive device (IED) skills and casualty evacuation drills as well as offensive and defensive missions. From getting to know one another’s kit and equipment, to understanding each other’s experiences and tactics on operations, the exercise provides an excellent platform from which to learn about each other’s organisations.

The Dogra Regiment units are among the most prestigious and most decorated regiments of the Indian Army. The Commanding Officer of 14th Battalion, The Dogra Regiment, Colonel Amit Saini said: “We are very fortunate to come here to participate in the 5th edition of Exercise AJEYA WARRIOR.

“Personally, it is a very proud moment for me to be leading 14th Battalion of the Dogra Regiment on this exercise with the 1st Battalion The Rifles.

“We are here to learn the best practises of the British Army and to showcase our own expertise and hone our skills so that in the future we can operate jointly under the wider UN mandate and achieve great success wherever we are operating.”

Brigadier Gavin Thompson, the UK’s Defence Adviser in New Delhi, said: “The armies of the UK and India have a shared history of working together and continue to benefit from a close relationship; exercises such as this help develop best practice.

“The exercise sees British and Indian troops training together to learn about each other’s tactics, share experiences and through greater cultural sharing, broaden their horizons.”

He continued: “The exercise demonstrates our high levels of interoperability, evident from bi-annual joint exercises across all the services where Indian and British forces undertake joint training such as this one with the Army (Exercise AJEYA WARRIOR), Exercise KONKAN with the Navy and the Air Force Exercise INDRA DHANUSH, which is taking place in India right now.”

The UK and India are very strong natural partners. The UK is the right partner to support India in the face of modern security challenges, with its deep experience of counter insurgency operations and a robust defence industrial base that is looking to work collaboratively with India’s defence industry. The British and Indian Armies are also working together right now with the UN Peace Keeping mission in South Sudan (UNMISS).

Editorial Comment: Although this release was issued today, the accompanying images were actually captured at the beginning of last week, 17th February, and several days into the exercise.

The JOINT-FORCES.com team would very much have liked the opportunity to photograph these joint British and Indian manoeuvres, which we understand were part of the latest WESSEX STORM and culminated in a 72-hour field exercise, but these days the Communications department of the UK Ministry of Defence seems to prefer writing the ‘news’ itself (aka generating propaganda) and circulating it a week or more after the event (when it is no longer truly newsworthy) rather than allowing independent and timely news coverage by specialist photo-journalists interested in both Britain’s armed forces and the sterling work they do.

Here at JOINT-FORCES.com we would also very much appreciate it if UK MoD Directorate of Defence Communications personnel could find the time to answer pertinent and relevant questions about exercises and deployments, rather than opening and ignoring the mail… but that is another story.