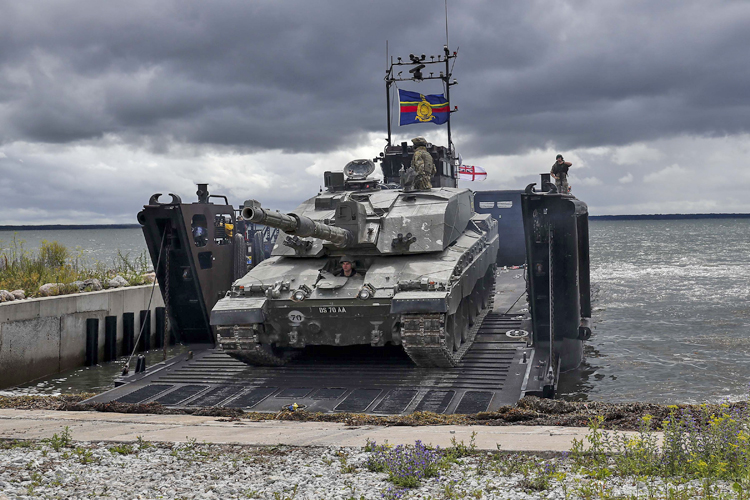 Last Friday, 19th July, the Royal Navy announced that its Fleet Flagship HMS Albion had returned to Plymouth at the end of Exercise BALTIC PROTECTOR.

BALTIC PROTECTOR 2019 was a UK-led Joint Expeditionary Force (JEF) Maritime Task Group deployment that saw around 3,000 personnel and 20 vessels from JEF partner nations exercise with each other in the Baltic Region but, as UK MoD currently has a policy of writing the news itself rather than inviting independent media to cover UK Forces on national and UK-led international exercises, details are a bit scant.

What we can safely is that the JEF (successor to Britain’s Joint Rapid Reaction Force) multinational exercise ran from late May through to last week and commenced with the Royal Marines and Royal Netherlands Marine Corps conducting an amphibious landing in Denmark, and the action phase concluded with a dynamic display as part of a Distinguished Visitors Day in Estonia on 4th July.

The following day one of the King’s Royal Hussars Challenger 2 Main Battle Tanks, deployed to Estonia on Operation CABRIT as part of NATO’s eFP (enhanced Forward Presence) mission in Poland and the Baltic States, was transported out to HMS Albion aboard a Landing Craft Utility crewed by 4 Assault Support Royal Marines (4ASRM) personnel; this is said to have been the first time that the Royal Navy and British Army have been able to practise embarking a Challenger 2 on an LCU since 2011.