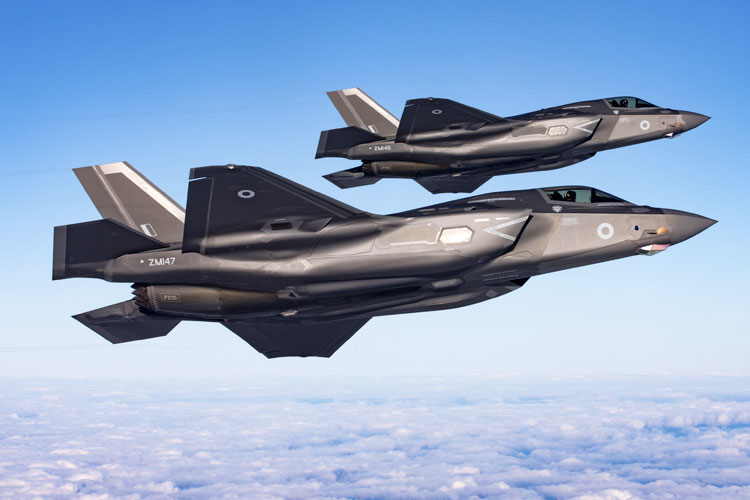 Royal Air Force F-35B Lightning jets have passed another significant milestone by conducting their first exercise with UK based American F-15s and French Air Force Rafales, over the skies of East Anglia and the North Sea.

For the pilots of the F-35s the exercise gave an opportunity to continue to develop procedures to integrate 4th and 5th generation fighter aircraft. The exercise also aimed to improve the operational capability within the established tri lateral framework of RAF, USAF, French Air Force cooperation.

Explaining the significance of the exercise Air Commodore Jez Attridge the RAF Joint Force Air Component Commander said: “The first point of an air force is to be able to defend the country so you have to recognise the threats out there.

“We can see the environment is changing, we can see the challenge that Russia is giving to the international rules-based order so we are the insurance policy and we are recognising that through the scenario that we’ve got, the non-permissive environment, and our ability to operate with our allies, the French and the Americans, is paramount.”

He added: “It really is a case of us staying ready so that we can be used if we’re needed, It’s a great insurance policy.”

The United States Air Force and French Air Force jets have been operating from RAF Lakenheath the home of the US Air Force’s 48th Fighter Wing for the exercise. The US F-15s and French Rafale fighter jets in addition to the F-35s joined RAF Typhoon, Hawk and Voyager aircraft to simulate air to air and air to ground conflict. The RAF also deployed simulated air defence systems to test the pilots during the exercise.

Wing Commander John “Butch” Butcher, the officer commanding 617 squadron, said: “This particular exercise is different to any ones that we’ve done previously because of the threats that are out there. It’s the first time we’ve done a peer exercise and that we’ve worked alongside French and US partners.”

Explaining the importance of the exercise for 617 Sqn RAF, Wg Cdr Butcher added: “Things are progressing well with the aim of declaring initial operating capability for the F-35s by the end of the year.” Background: Ex POINT BLANK is the latest exercise conducted within the framework of the Trilateral Strategic Imitative that was originally signed by the then US, UK and French Air Force Chiefs in 2011 and was renewed in 2017. The aim of the agreement was to advance the strategic dialogue between the three air forces to improve interoperability and cooperation. For 2018/19 the Chiefs have agreed that Command and Control, information sharing and future basing would be the focus for Tri-Lat activities including exercises.
Share