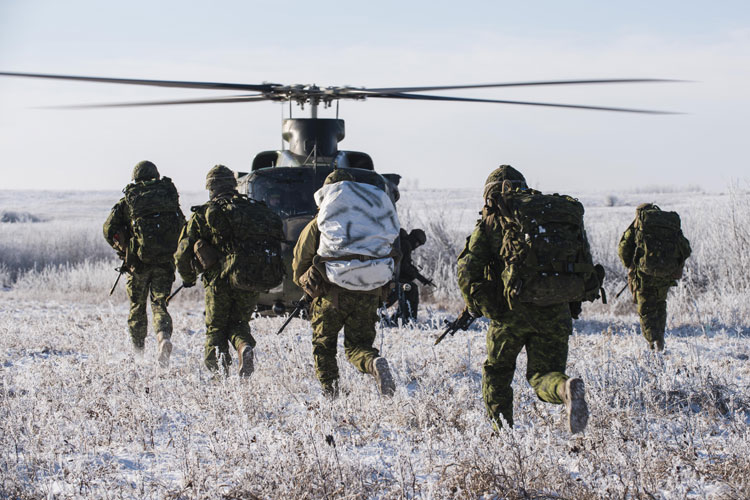 Soldiers from Canada and six NATO partner nations are putting their skills to the test at the Canadian Patrol Concentration in Alberta.

DND News Release, 19 November 2018: The Canadian Patrol Concentration is taking place at Canadian Forces Base Wainwright, Alberta. During the annual training event, which runs until November 25, 2018, Canadian soldiers along with soldiers from six NATO partner nations are conducting a series of long-range patrols while responding to realistic, scenario-based events.

The Canadian Patrol Concentration is planned annually by the Canadian Manoeuvre Training Centre to improve operational readiness and develop our soldiers’ ability to operate with counterparts from Allied nations, in support of Strong, Secure, Engaged: Canada’s Defence Policy.

The event will also improve these soldiers’ ability to adapt as they contend with unpredictable weather and 40 kilometres of unfamiliar terrain which will challenge their soldiering skills, their leadership abilities, their stamina, and their mental resilience.

In addition to 150 Regular Force and Primary Reserve soldiers, participants and observers from Italy, Latvia, the Netherlands, Poland, the United Kingdom, and the United States are attending this year’s iteration of the Canadian Patrol Concentration.

“The Canadian Patrol Concentration takes the essence of what it means to be a soldier, compresses that into two days, and then stretches it over 40 kilometres. It’s a superb opportunity for soldiers to show their skills and what they’re made of,” said Chief Warrant Officer Eric Poissant, Regimental Sergeant-Major, Canadian Manoeuvre Training Centre.

¤ The Canadian Manoeuvre Training Centre (CMTC) is a national training centre that designs and delivers training for the Canadian Army. Short of an actual deployment, CMTC provides the most realistic and dynamic experience to prepare Canadian troops for an operational deployment.

¤ The Canadian Manoeuvre Training Centre is part of the Canadian Army Doctrine and Training Centre, which is responsible for the supervision, integration and delivery of land operations training and doctrine development, including simulation and digitization.