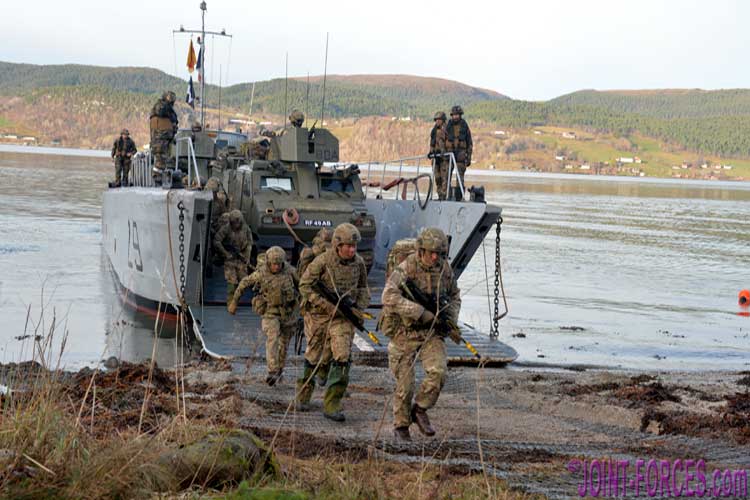 While I covered the British-led 4 Multi-National Brigade defending Bergset and blocking North Force, Carl headed 150km north of his base to the west of Oppdal to cover this second amphibious force coming ashore. Unconstrained by the (necessary) restrictions of Distinguished Visitors Day, which saw us both corralled in a Media Pens hundreds of metres away, this time Carl was able to get onto one of the landing beaches to document the action.

A combined joint force of French, Finnish, Dutch and British amphibious troops and their equipment was landed in a small fjord near Kyrksæterøra to combat the North Force Amphibious Task Group which was putting pressure on the Italian-led multi-national brigade on the westernmost North-South axis. This surprise move worked and contributed to Sunday’s (F-day) reversal of the war. The accompanying images illustrate this second landing.

Tonight, if all goes to plan, we will bring you images of yesterday’s F+1 TRJE18 (TRIDENT JUNCTURE 2018) withdrawal by the Swedish elements of North (Red) Force on the easternmost North-South axis as the German-led multinational South (Blue) Force counter-attacked. Last night (5/6th) North Force was pulling back to defensive positions – I know as it seemed like most of the centremost brigade drove virtually underneath my hotel balcony!