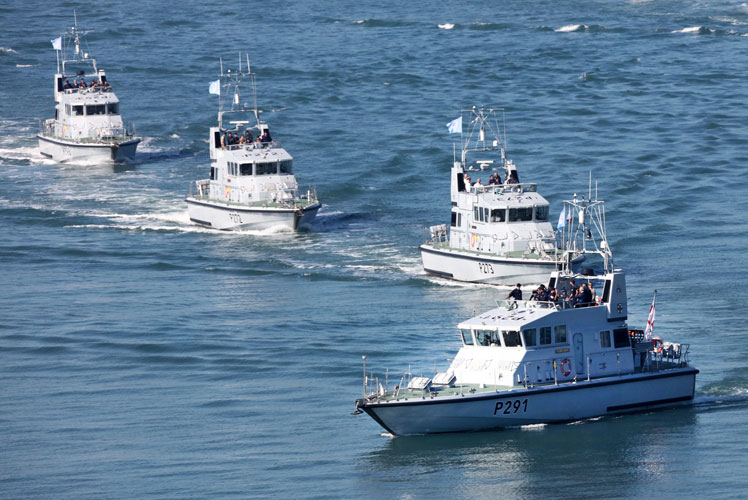 On Thursday 27th September all 14 of the Royal Navy’s P2000 class ships took to the Solent as part of their annual squadron exercise.

Royal Navy Press Release: The 1st Patrol Boat Squadron have five ships based in HMNB Portsmouth while the others are based around the UK – with two in Gibraltar – and affiliated to allocated universities. As well as providing training and maritime experience for the university students, the patrol vessels provide support to wider Fleet tasking and often take the role of attack craft in maritime exercise around the UK and Europe. Commanded by lieutenants with a small Royal Navy ship’s company, university students also crew the ships to learn about the Service and to enjoy the camaraderie of working in a small team.

Commanding Officer of 1PBS Cdr Milly Ingham said: “It has been a fantastic day and an excellent opportunity for all the junior officers and their ship’s companies to practice a complicated series of manoeuvres out on the Solent as part of their development. This is an exercise that happens once a year and it is an incredibly important one, not just for the excellent training it provides but also for everyone to catch up with their counterparts.”

The ships sailed out of Portsmouth harbour in the morning to practice a number of complicated sequences – at speed and in close proximity – testing the navigating skills of the commanding officers.

Lieutenant Lauren Webber, aged 26 of Weymouth, took command of HMS Puncher in March and said it was challenging, but a great experience. “I’ve really enjoyed today, it’s good to practice the skills we have learnt and sail alongside the other P2000s,” she said. “While it’s a small ship’s company I command, it still provides me with the skills and knowledge of leading a team in high pressure situations which is essential of then going onto the larger ships in the future.”

As well as being based at ports around the UK HMS Raider and HMS Tracker make up the Faslane Patrol Boat Squadron which is part of the team in Scotland who safeguard Britain’s nuclear fleet and HMS Sabre and HMS Scimitar are the Gibraltar Squadron who support ships in the Strait of Gibraltar.