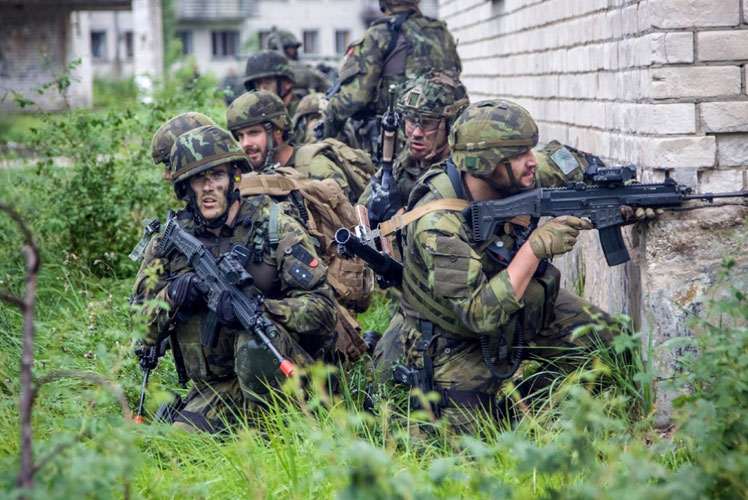 The Czech contingent of the NATO enhanced Forward Presence (eFP) battlegroup in Lithuania returned on 3rd September to its base in Rukla after taking part in Exercise NAMEJS in Latvia.

News Release, 7th September: The exercise, involving ten thousand participants from 13 NATO countries, concluded last weekend after two action filled weeks of training in mobility, readiness and interoperability of NATO and national forces. It was the largest of its kind ever conducted in Latvia and took place in every region of the country.

The Czech Mechanised Infantry Company brought together around 180 troops and 15 Pandur-II Infantry Fighting Vehicles from Rukla to Latvia to take part in various exercise scenarios. Their mission included extensive manoeuvring of vehicles all over Latvia, which proved to be an excellent test of the units’ capabilities.

“As we predicted, the constant manoeuvring from one place to another, which was our role in the exercise, was one of our main challenges, but the troops did extremely well,” said Lieutenant Colonel Jiri Libal, commander of the Czech unit in Lithuania. “Our troops were mostly playing the enemy forces. Engaging defensive units in built up areas, forests and other terrains. Among other tasks, we engaged the Latvian National Reservist Units and the eFP Battle Group in Latvia in their defensive positions.”

The Commander of the Joint Headquarters of Latvian Army, Lieutenant General Leonids Kalnins, was highly impressed by the performance and, after the exercise had concluded, he stated: “I personally witnessed that the tactic and combat skills of the Czech company is at a very high level.”

Lieutenant Colonel René Braun, Commander of the eFP Battle Group in Lithuania, was also very happy with the Czech participation in NAMEJS 2018. “The troops did very well and it was a very useful experience both for them and our battle group.

“This was the first time for the eFP Battle Group to participate with a whole company in an exercise outside Lithuania. On all levels, there were a lot of lessons learned, especially in logistics and interoperability. In the end, it was a great display of unity and cooperation within the Baltic States and a common understanding of staying together and showing strength in a powerful NATO mindset.”