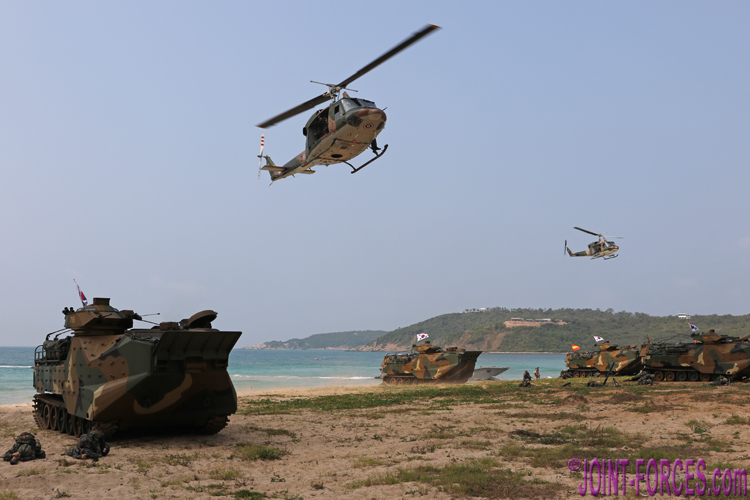 COBRA GOLD is the largest such exercise in Southeast Asia and this year 11,075 troops from 29 nations participated, although it should be noted that many of these nations were only present on an observer basis. The main participants were Indonesia, Japan, Malaysia, Singapore, South Korea, Thailand and the USA.

Interestingly, 2018 was one of the largest COBRA GOLD events ever, with approximately 6,800 American troops from four services present. In recent years, US involvement has been somewhat curtailed due to political considerations after Thailand’s military coup in 2014, which sees the junta still in power.

One highlight of the exercise was a combined amphibious assault at Hat Yao Beach on 17th February, witnessed by JOINT-FORCES. The event saw AAV7s, helicopters and landing craft from South Korea, Thailand and the USA depositing personnel and equipment ashore in a high-intensity assault.

About 250 South Koreans from the 71st Battalion, 7th Marine Regiment of the 1st Marine Division participated in the amphibious lodgement. This was the largest contingent from the Republic of Korea Marine Corps (ROKMC) ever, even though they have been involved in COBRA GOLD since 2010. South Korea despatched the 4,950-tonne LST-II ROKS Cheon Ja Bong, eight KAAVs and two K55 self-propelled howitzers.

General Robert Neller, commandant of the US Marine Corps (USMC), observed the landing. After the event, he told media, “Our friends in the Republic of Korea, South Koreans, we stand by them. We work with them. We are allies. We continue to coordinate and keep pressure on. Hopefully through diplomatic means we would be able to come to some successful resolution of the problem.”

He was referring to the Korean Peninsula, at a time when tensions were soaring and uninformed media were blithely reporting that the USA and South Korea were contemplating an amphibious assault against North Korea.

Usually the 31st Marine Expeditionary Unit (MEU), which is forward deployed in Okinawa, Japan, takes part in Exercise COBRA GOLD. However, in 2018 the main USMC force was instead 3/3 Marines of the 3rd Marine Division, based in Hawaii but rotationally deployed in Okinawa at that time.

Members of 3/3 Marines, usually based in Hawaii but rotating to Okinawa at the time, provide overwatch on Hat Yao Beach [© GA]

Colonel Michael Kuhn, assistant division commander of the USMC’s 3rd Marine Division, said this was just one of 87 exercises around the Pacific for the USMC this year. He described such events as critical for the USMC in returning to its roots of amphibious operations, with probably less than 10% of his Marines having even been on a ship prior to that exercise. “It’s the hardest thing you have to do and it’s the hardest thing to coordinate.”

Another event that JOINT-FORCES attended in Thailand was a Non-combatant Evacuation Operation (NEO) at U-Tapao Royal Thai Navy Airfield. This involved Japanese, Malaysian, Thai and US troops evacuating their respective nationals – mostly role players who were embassy staff and family members – from the dual-use airport.

Japan’s main participation in the annual COBRA GOLD series is actually the conducting of this NEO. Led by the Central Readiness Regiment of the Japan Ground Self-Defense Force (JGSDF), approximately 110 personnel were involved this year. The JSDF deployed an LAV 4×4 armoured vehicle and a C-130H aircraft for the NEO. Meanwhile, the USMC, Royal Thai Air Force and Royal Malaysian Air Force contributed a Hercules aircraft each for the evacuation rehearsal. A KAAV, carrying personnel of the 71st Battalion, 7th Marine Regiment of the 1st Marine Division, drives ashore whilst emitting a smokescreen [© GA] These are members of the Republic of Korea Marine Corps – the one on the right has a K3 5.56mm light machine gun fitted with a Minimised Thermal Weapon Sight [© GA]