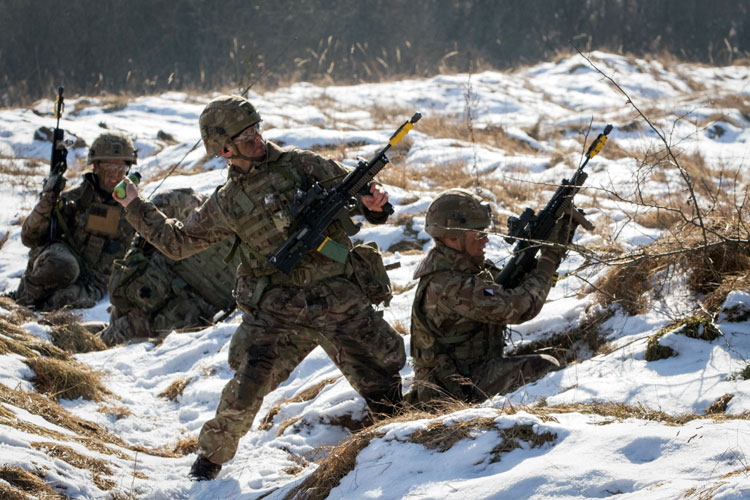 British troops from B Squadron of the Light Dragoons deployed on Operation CABRIT as part of the NATO eFP shield have recently concluded a four-day coordinated patrol competition at the Bemowo Piskie Training Area in Poland.

Part of multinational Battle Group Poland (BG POL), one of four mutually supporting formations forming a defensive shield from Estonia in the east through Latvia and Lithuania to Poland in the west, the British troops are operationally deployed alongside American, Croatian and Romanian allies serving with the Polish 15th Mechanised Brigade. The British personnel serving with BG POL are equipped with Supacat JACKAL 4×4 and COYOTE 6×6 vehicles and operate as a Reconnaissance Troop for the US 2nd Cavalry Regiment.

A British JACKAL on the range during a four-day coordinated patrol competition at Bemowo Piskie Training Area [US Army: Spc. Andrew McNeil]

A British soldier briefs US soldiers on the tasks needed to complete the forward observer station as they participate in the four-day British coordinated patrol competition [US Army: Spc. Andrew McNeil]

British soldiers provide support fire as they complete the maneouvering station while participating in the four-day patrol competition [US Army: Spc. Andrew McNeil]

Light Dragoons fire an N-LAW (MBT LAW in US parlance) at a range near Bemowo Piskie [US Army: Spc. Andrew McNeil]