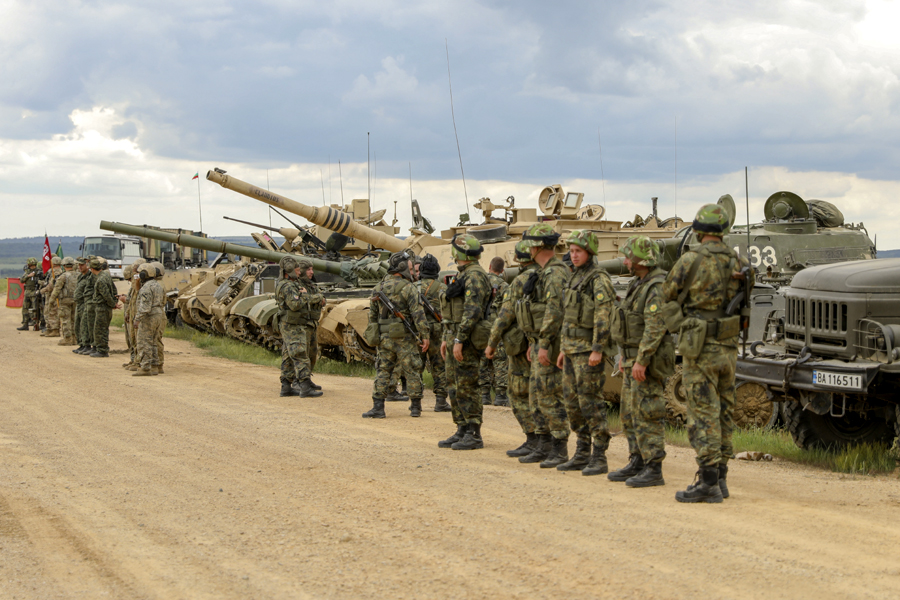 US Army Soldiers and Bulgarian Armed Forces align their vehicles next to one another for a ceremony in support of SABER GUARDIAN 21 at Novo Selo Training Range, May 27, 2021 [US Army: Spc. Christian Cote]

Over the last ten days US Army personnel have been reinforcing NATO Allies Bulgaria and Hungary as part of DEF21-linked SABER GUARDIAN 21.

SABER GUARDIAN 21 is a linked exercise of DEFENDER-Europe 21. Abbreviated to DEF21, this programme is a large-scale US Army-led exercise series designed to build readiness and interoperability between the US, NATO Allies and Partner militaries. This year, more than 28,000 multinational forces from 26 nations are scheduled to conduct nearly simultaneous operations across more than 30 training areas in more than a dozen countries from the Baltic States to the strategically important Balkans and Black Sea Region.

Just as in 2021, the COVID-19 pandemic has quite seriously impacted the original DEFENDER-Europe plans but, as we personally witnessed out in the Baltic theatre throughout May, successful mitigation measures including inoculating, quarantining and regular testing of participating troops allowed far more of this year’s programme than last to proceed pretty much as planned. Regrettably most civilian flights across Europe will not resume until after DEF21 concludes in June (and one of the few scheduled civvy flights which did take place between the Balkans and the Baltic in May – Ryanair 4987 on Sunday 23rd – was forced out of the sky by the Belarusian Air Force) but fortunately US Army photographers on the exercise have recorded many of those events we would have liked to have been able to cover but simply couldn’t.

This year, as part of SABER GUARDIAN, the US 2nd Cavalry ‘Dragoon Ride’ transited from their base in Bavaria through to the Balkans, rather than to the Baltic States as in past years, and US Army formations from the 5th Cavalry Regiment and 12th Combat Aviation Brigade deployed into Bulgaria for a live-fire.