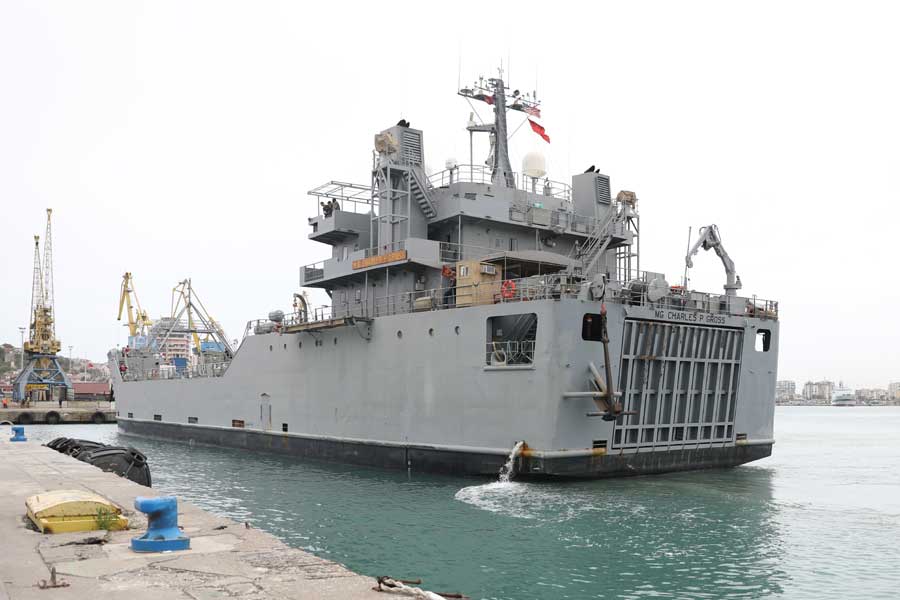 The US Army Logistics Support Vessel MG Charles P. Gross (LSV-5) comes in to dock in Durres carrying equipment and supplies for DEFENDER-Europe 21, 01 May 2021 [US Army:SSgt. Elizabeth O. Bryson]

Momentum continues with DEFENDER-Europe 21 (DEF21) and the linked exercises which are currently underway from the Balkans to the Baltic.

In the last DEF21 Brief Update we promised to upload images from the JLOTS operation in Albania once the became available.

In addition to the USNS Bob Hope, one of the massive US Navy fast sealift vessels, two US Army Logistics Support Vessels, LSV-5 MG Charles P. Gross and LSV-6 SP4 James A. Loux are ferrying vehicles and equipment from ship to shore. These General Frank S. Besson class ocean-going landing craft are the largest ships in the US Army inventory and are able to operate in as little as four feet (1250mm) of water and can beach themselves to unload up to fifteen M1 Abrams tanks apiece.

Footnote: As DEFENDER-Europe 21 and the linked exercises are building up to be the biggest US-led transatlantic temporary deployment of troops since the last of the REFORGER (RETurn of FORces to GERmany) deployments three decades ago, we have created a separate sub-section of the website to keep everything together. Under current pandemic travel restrictions and limitations we cannot, unfortunately, be on the ground ourselves to cover DEF21 first-hand as it expands across Europe over the next six weeks or so. However whenever possible we will try to bring you updates using official images taken by US military photographers.