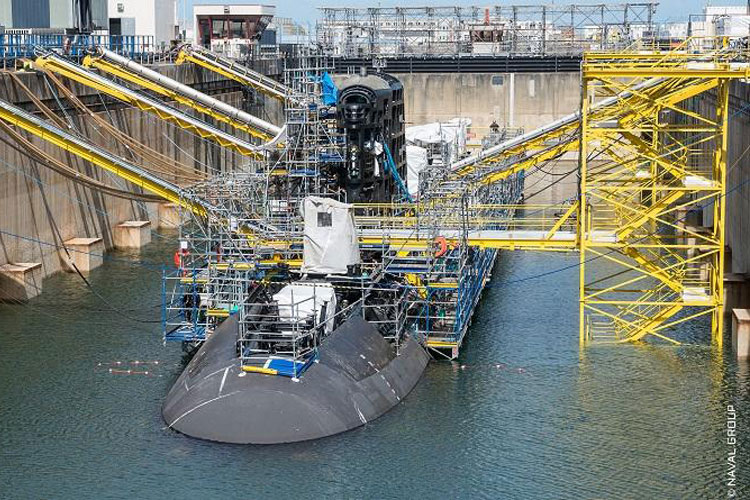 The French DGA has announced the start-up of the nuclear boiler room of the Barracuda programme nuclear attack submarine SNA Duguay-Trouin.

DGA News Release, Paris, 03 October 2022: [auto-translated] The Barracuda programme, piloted by the General Directorate of Armaments (DGA) for the benefit of the French Navy, reached a new stage on September 30, 2022 with the start-up of the nuclear boiler room of the SNA Duguay-Trouin, the second submarine of the series, currently being completed and tested in Cherbourg.

Like their predecessors, the nuclear attack submarines of the Barracuda programme are equipped with nuclear propulsion which gives them a remarkable radius of action and discretion. They are faster, more durable and more versatile than the previous generation SNAs with their new capabilities of implementing special forces and striking land targets located several hundred kilometres away using naval cruise missiles. They represent a technological leap that allows France to remain in the very restricted club of nations that implement modern and high-performance SNAs.

Ordered in 2009 by the DGA, the SNA Duguay-Trouin was transferred from the Naval Group construction hall in Cherbourg for the launching system in November 2021. After testing the equipment installed on board, water was put in the Cachin basin in the summer of 2022. The start-up of the nuclear boiler room, or first divergence, which consists in ensuring the proper start-up of its reactor, marks a major milestone in the verification of the proper functioning of the propulsion before sea trials and then delivery scheduled for 2023.

The four other submarines of the Barracuda programme (Tourville, de Grasse, Rubis and Casabianca) are currently at various stages of construction, and their deliveries will be staggered until 2030.