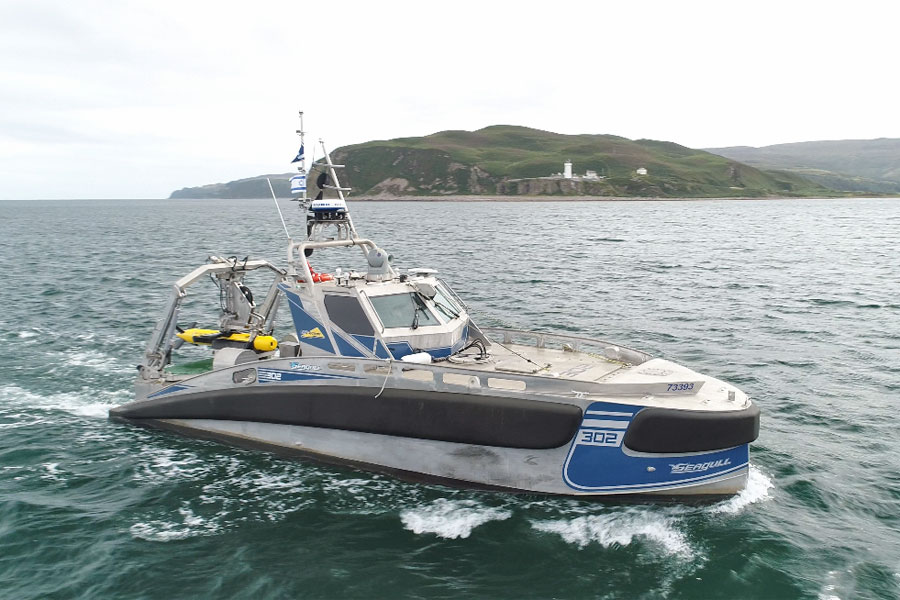 Press Release, London, 04 October 2022: Elbit Systems UK recently conducted successful demonstrations of its Seagull Uncrewed Surface Vessel (USV) to showcase its proven autonomous mine hunting technology for the UK Ministry of Defence (MoD). The Wilton Industry Show and Experiment (WISEX) demonstrations aimed to provide MoD and industry partners with an analysis of Seagull’s mine hunting capabilities under operational conditions. The WISEX demonstrations took place off the coast of Scotland and Seagull achieved a 100% target detection rate.

As part of the Royal Navy’s transition towards an autonomous Mine Hunting Capability, MoD invited Elbit Systems UK to demonstrate Seagull and her Mine Countermeasure (MCM) toolbox sub-systems under operational conditions – involving key environmental variables, such as differing depths, currents and tidal streams – in UK Waters in Scotland. The demonstrations took place in July and August and involved showcasing specific capability to provide the Royal Navy with the evidence required to inform the progress of its Mine Hunting Capability Programme. Co-sponsored by Navy DEVELOP and Defence Equipment & Support (DE&S), the demonstrations were also supported by Dstl stakeholders.

The demonstration area comprised two simulated minefields seeded with mine-like objects to challenge Seagull’s detection and MCM capabilities. Despite the demanding sea state, the demonstrations were a resounding success, with the Seagull USV and her mission system payloads achieving a target detection and identification rate of 100%.

Seagull is the only operationally proven USV currently available in the world, and it can be deployed for a variety of crewed and uncrewed missions. Modular and agnostic in design, Seagull’s mission system payloads can be used to support Mine Warfare, Anti-Submarine Warfare, Anti-Surface Warfare, Electronic Warfare and ISR operations – providing navies with a full spectrum of autonomous operational capability. Additionally, its Mission Command Station can be operated from a mothership, from a headquarters, or transported in a mission module vehicle to a remote location onshore – as was the case during the WISEX demonstrations.

Martin Fausset, CEO of Elbit Systems UK, said: “The great success of the Seagull trials proves that Elbit Systems UK is spearheading USV technology globally, and that our cutting-edge autonomous maritime technology offers innovative and consistent results. These demonstrations provided the Royal Navy with the evidence necessary to inform the requirements of MoD’s programme development trials, and further highlights our continued commitment to developing technology designed to safeguard our Armed Forces.”

Commander Ben Stait said:“The Royal Navy has established WISEX to allow industry to demonstrate their autonomous mine countermeasures systems, in the challenging naval exercise areas of the west coast of Scotland. This demonstration is part of the Mine Hunting Capability programme, which is at the forefront of next generation maritime autonomous systems. The Royal Navy is grateful for Elbit Systems UK participation and excited by the capability they demonstrated as the programme develops into its next phase.”

¤ Seagull is a trademark of Elbit Systems UK