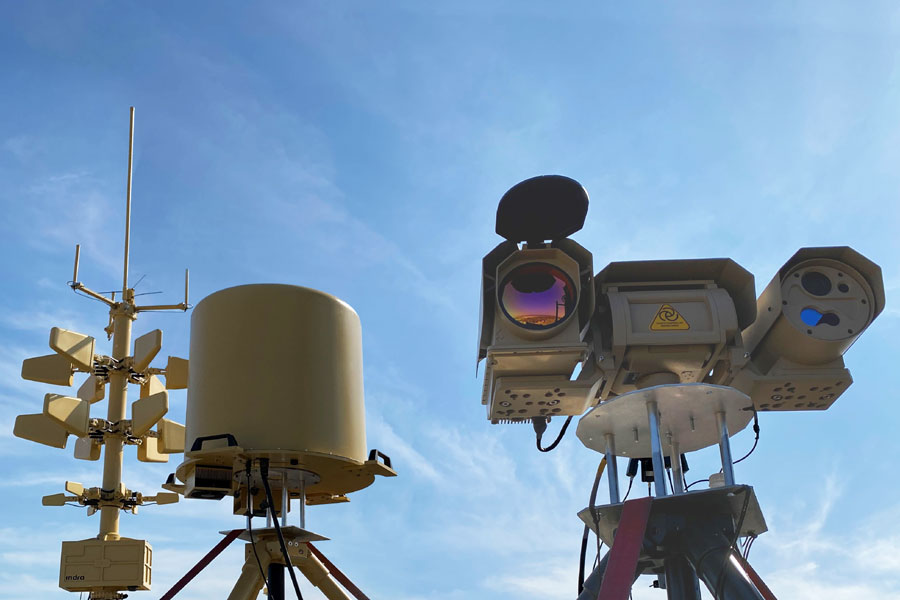 Indra’s ‘Crow’ anti-drone system counteracts a drone attack during a demonstration by the Spanish Air and Space Force at UNVEX in Seville.

Madrid, September 16, 2022: Two small unmanned aircraft take off without authorisation in the vicinity of an airbase, putting the safety of the air operations at risk. The [Spanish] Air and Space Force detects, analyses and neutralises the threat in a matter of seconds with the help of Crow, the cutting-edge anti-drone system that Indra presented this week at UNVEX, the flagship event held in Spain for the unmanned vehicle sector, which took place in Seville this year.

The Air Deployment Support Squadron (EADA) of the Air and Space Force was tasked with conducting the exercise and demonstrating to a large number of experts and customers the intelligence and significant capabilities of a state-of-the-art system that’s already being used during real military missions of the highest complexity. On this occasion, its mission consisted of protecting the runways of a small simulated airbase during which two drones unexpectedly took off just one kilometre away, leaving a short reaction time to neutralise them. The Crow system’s high-precision radar immediately detected the intrusion and its optoelectronic systems were able to establish visual contact with them to confirm the threat. At the same time, the system’s electronic defence antennas scanned the radio spectrum to determine what kind of link these devices were using.

All this information fed the advanced algorithm of Indra’s solution, which cross-checked with its data libraries the kind of drone it was dealing with and the most effective countermeasure to be employed. It was enough for the first of the two aircraft to cross the non-intrusion perimeter for Indra’s powerful jamming system to be activated and completely block the aircraft’s communication links and positioning systems, forcing them to land. The system thus prevented any of the drones, which were likely to be carrying some type of explosive, from having the slightest chance of approaching any of the aircraft that were landing.

According to Indra’s Counter UAS system manager, Juan López, “the vast majority of incidents that occur are caused by the inappropriate use of commercial drones, which many systems are able to counter, providing a false sense of security. To stop an intentional attack, during which advanced drones are used with the aim of causing as much damage as possible and the safety of passengers on a flight is jeopardised, requires the use of a fully reliable and effective system, such as the one Indra offers its customers”.

Anti-drone systems involve highly complex technology that requires the combined use of different systems working together with absolute accuracy and at enormous speed. In this respect, Indra has a huge advantage in that it’s one of the world’s leading radar manufacturers, a leader in electronic defence and command and control systems and a pioneer in the development of all kinds of radio frequency, positioning and communication systems. At the same time, it’s a drone manufacturer that relies on its own family of unmanned vehicles, providing it with in-depth knowledge of the systems it employs and how to neutralise them. Only in this way it is possible to bring a critical solution such as this to the market; all the world’s airports, industrial facilities and public buildings will have to incorporate it in the coming years, and armies are already using it to protect themselves in conflict zones.