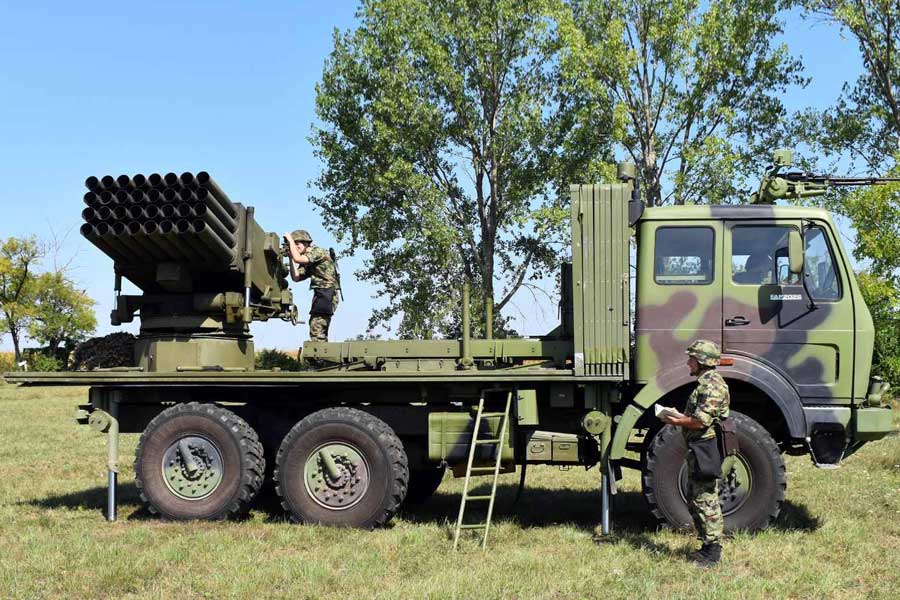 News Release, Belgrade, 18 August 2022: Deputy Prime Minister and Minister of Defence, Nebojša Stefanović PhD, has pointed out that the firepower of the Serbian Armed Forces’ artillery units, and consequently their ability to carry out rapid and efficient operations, has been significantly increased thanks to the equipment produced by the domestic defence industry that they have been provided with.

According to him, members of the 1st Army Brigade are currently undergoing routine training in the combat use of digitised 128mm M-17 ‘Oganj‘ rocket launchers at the training grounds of Boško Palkovljević Pinki barracks in Sremska Mitrovica.

“Our personnel continue to train in order to improve their skills in using this modernised artillery system and be able to provide fire support to other Army units. However, I am particularly pleased that soldiers, who have been performing their voluntary military service since March this year, are undergoing their specialised training alongside them,” said Minister Stefanović.

Crews are currently being taught a diverse tactical training content at the barracks in Mitrovica, including gun emplacement, target acquisition, calculation of initial firing data, fire adjustment, and preparation for the execution of training activities in the field and artillery live firing.

“Since it was provided with these modernised Oganj systems, the 1st Army Brigade has become one of the best equipped units of our artillery and beyond. Namely, compared to the basic variant of this weapon, the time to prepare the digitised Oganj for action has been reduced from 15 to about three minutes, and its maximum range with the newly developed rockets is 40km instead of the original 22.5km,” said the Minister of Defence. He also noted that the 2nd Army Brigade’s artillery units are currently being equipped with modernised 122 mm 2S1 Gvozdika self-propelled howitzers and armoured command post personnel carriers.