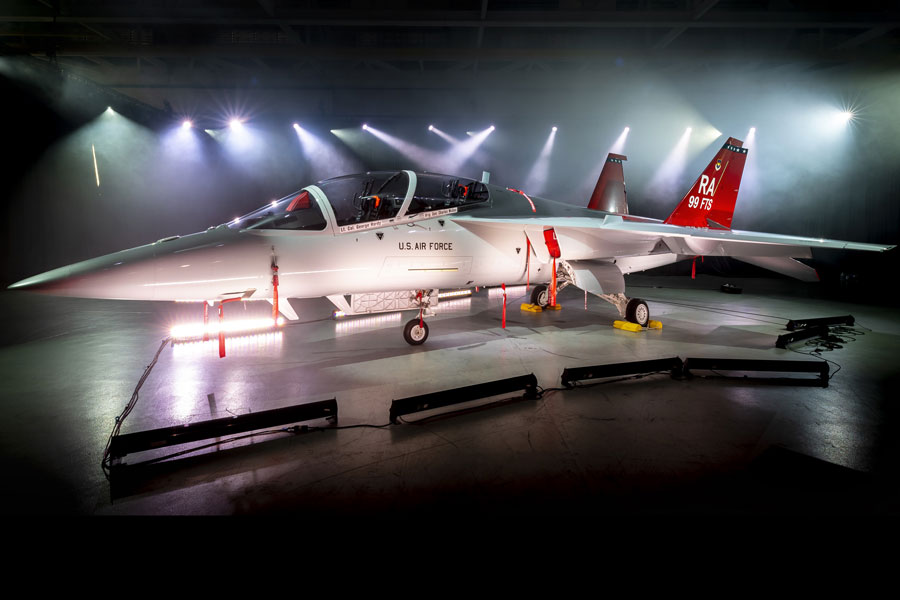 Press Release, Linköping, 28 April 2022: During a roll-out ceremony on Thursday, April 28, the first T-7A Red Hawk advanced trainer test aircraft built under the Engineering and Manufacturing Development (EMD) phase of the programme was revealed at Boeing’s production facilities in St Louis, Missouri, with senior representatives of the United States Air Force (USAF), Boeing, and Saab all in attendance.

The aircraft is part of a new, modern, and advanced pilot training system which will be delivered to the USAF, known as T-7A Red Hawk in honour of the Tuskegee Airmen.

“Today is the culmination of years of work, design, and partnership between Boeing and Saab. Saab’s knowledge and expertise contributed to the design and production of this world-class trainer, with more than a thousand Saab employees involved. Collectively we set out an ambitious vision: to redefine what a trainer jet is, but also how they are made, and we have succeeded,” said Saab’s President and CEO Micael Johansson.

“This programme has significantly grown our US operations, fulfilling Saab’s promise of US jobs, technology transfer and local economic benefits. Saab’s new advanced manufacturing and production facility for the fully installed aft fuselage of the T-7A Red Hawk, located in West Lafayette, Indiana, is a testament to Saab’s commitment to the US as a multi-domestic company,” said Micael Johansson.

With the T-7A Red Hawk, Boeing and Saab have applied an innovative digital strategy for design, development, and production of military aircraft. For several years, model-based engineering has been integral to Saab’s success – first, with the development of Gripen E, and now, as part of the T-7 programme.

The close working partnership between Boeing and Saab enabled the programme to deliver an all-new aircraft in record time, through a relentless focus on efficiency and accuracy. The next steps for the programme include a first flight for the EMD T-7A and Saab’s continued knowledge and technology transfer to its US operations.