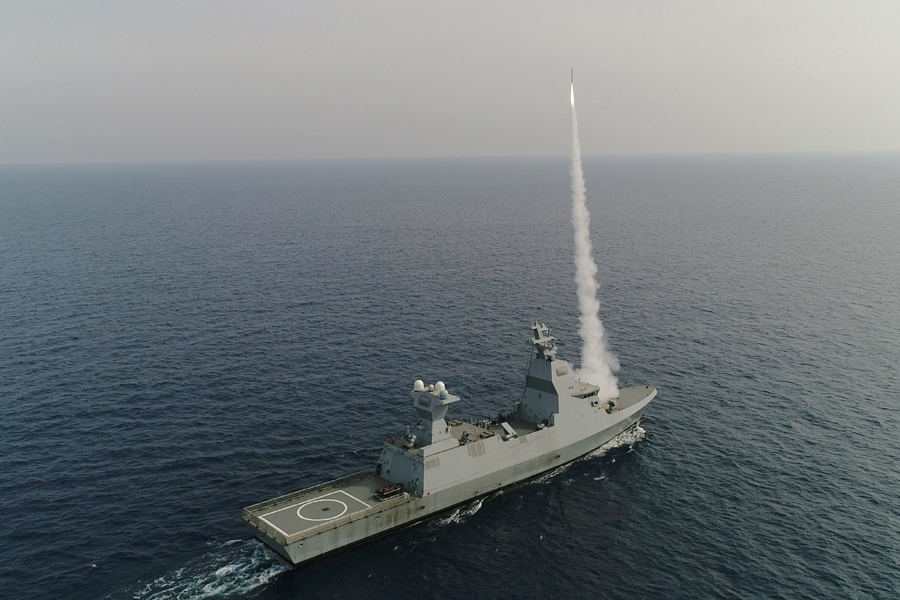 Press Release, Tel Aviv, 22 February 2022: Rafael Advanced Defense Systems, the Israel Missile Defense Organization (IMDO), in the Directorate for Defense R&D of the Israel Ministry of Defense, and the IDF have completed a successful series of live-fire tests of the C-Dome system – an advanced naval configuration of the Iron Dome defence system. The C-Dome was operated for the first time aboard the Israeli Naval Ship (INS) Sa’ar 6 ‘Magen’ corvette against multiple advanced threats. Crew members of the INS ‘Magen’ led the C-Dome tests.

The test campaign consisted of a number of scenarios simulating advanced threats, including rockets, cruise missiles and UAVs. The C-Dome is capable of successfully intercepting such threats. This successful live-fire test is an important milestone and demonstrates the operational capability of the Israeli Navy to defend the strategic assets and vital interests of the State of Israel against current and evolving threats.

Defense Minister Benny Gantz: “I commend the DDR&D, IDF and Rafael for the completion of an unprecedented test. The systems that we are developing as part of Israel’s multi-tier missile defence array enable us to operate against Iranian proxies in the region and defend against their weapon systems, which are constantly being upgraded. We continue to be two steps ahead of them and we will continue developing and upgrading our capabilities in order to maintain security superiority in the region and to defend the citizens and assets of the State of Israel.”

Head of Rafael’s Naval Warfare Systems Directorate, Ran Tavor: “Rafael is proud to announce the completion of a successful series of tests of the naval configuration of the Iron Dome. This test marks the end of a process to develop and adapt the Iron Dome to naval platforms, according to the requirements outlined by the DDR&D and the IDF. The tests demonstrated Rafael’s advanced engineering and development capabilities, as well as the capability to successfully integrate complex systems.”

Head of the Directorate for Defense R&D in the Israel Ministry of Defense, Brig. Gen. (Res.) Dr. Danny Gold: “The success of this test constitutes a significant technological breakthrough in the field of missile defence, and is the result of the Directorate’s vision and cooperation with the IDF and Israeli defence industries.”

Director of the Israel Missile Defense Organization, Moshe Patel: “Today we mark another historic milestone for the Iron Dome defence system – the completion of a series of successful offshore tests of the missile defence system onboard a naval vessel. The advanced detection system accurately identified various threats including rocket fire, cruise missiles and UAVs. The system successfully intercepted the threats with surgical precision. The success of today’s tests further strengthens our confidence in our missile defence systems as well as the ability of the Israeli Navy to defend the maritime assets of the State of Israel.”