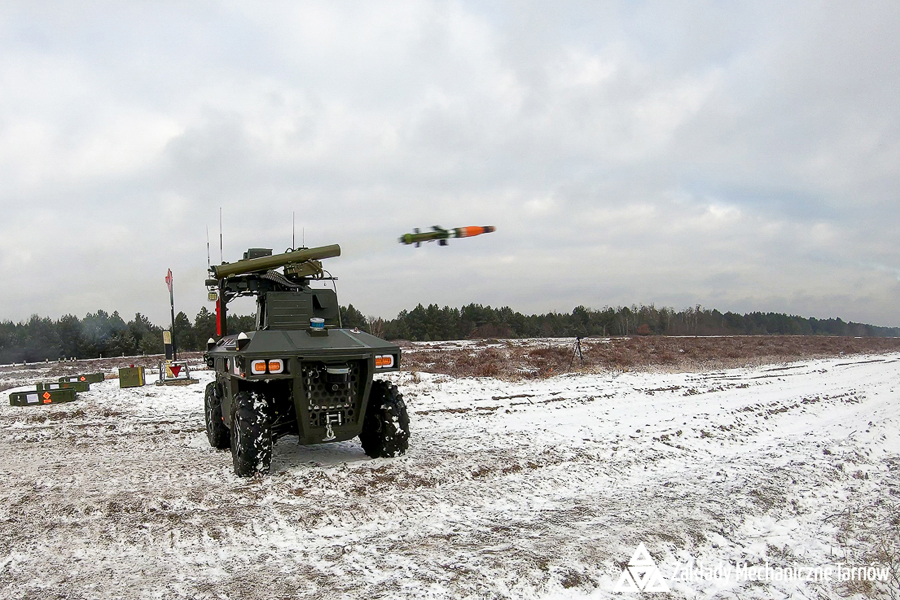 ZMT (Zakłady Mechaniczne Tarnów) of Poland has announced the successful integration of the PERUN UGV with the PIRAT ATGM.

Press Release, Tarnów, 14 January 2022: [auto-translated] The ‘Autonomous wheeled vehicle with an armament module for reconnaissance and combat tasks’ system was entirely developed by an industrial and scientific consortium composed of young scientists from Zakłady Mechaniczne Tarnów SA, Stekop SA and the Military University of Technology. The basic armament of the robot is a remotely controlled ZSMU A3C weapon module with a 7.62 mm or 12.7 mm machine gun, as well as non-lethal deterrent systems. Thanks to the open system configuration, it is possible to implement virtually any functionalities desired by the user, additional devices or means of communication.

At this year’s MSPO in Kielce, a demonstrator of an unmanned vehicle with the PIRAT ATGM was presented (together with MESKO SA and CRW TELESYSTEM-MESKO). The next step was to conduct firing that took place at the end of 2021.

“Thanks to the open configuration, we are able to include PERUN in superior systems and integrate various types of weapons or additional sensors. The integration of PERUN with the PIRAT anti-tank guided missile launcher and their guidance system allows not only to hit targets directly, but also to guide precision-guided ammunition (APR 155 mm and APR 120 mm) or other weapons compliant with STANAG 3733 (including bombs and guided missiles) on reflected laser radiation from fighters and drones).” Damian Jarosz, Project Manager.

PPK PIRAT is a rocket produced by MESKO SA with the participation of CRW TELESYSTEM-MESKO. PIRAT is a light, portable short-range anti-tank missile (up to 2.5 km) self-guiding to laser radiation reflected from the target, fired from the shoulder or from a universal, modular position for detection, tracking, identification and targeting (CLU – developed by CRW Telesystem -Mesko and PCO SA), containing a tripod launcher. The system uses precise guidance of the reflected laser beam illuminating the target, which the missile attacks from the so-called ‘upper hemisphere’, which guarantees very high combat effectiveness. The rocket is equipped with a cumulative warhead (another type of warhead may be used), a laser tracking head, an apparatus block with a rudder block,marching engine and is mounted together with the starter engine in a transport and launch container. In order to be launched, it is embedded in the launcher assembly and fired from the transport and launch container by means of the launch engine.

The PIRATE is designed to combat visually observed ground and air targets at any time of the day or night, including:

A characteristic feature of the set is automatic target following and automatic direction of the rocket flight to the point illuminated by the laser target designator.

“The recent shootings have confirmed the correctness of the integration of the ZSMU A3C weapon module with the PIRAT ATGM. Thus, PERUN became the first armed robot in Poland, which enables effective and safe fire from machine guns and the PIRAT ATGM. It is worth emphasising that the consolidation of the military, scientific and Polish industry around the subject of combat robots is also a success. The unique knowledge gained during the project implementation allows for further development in the field of unmanned armed land platforms.” Damian Jarosz, Project Manager.