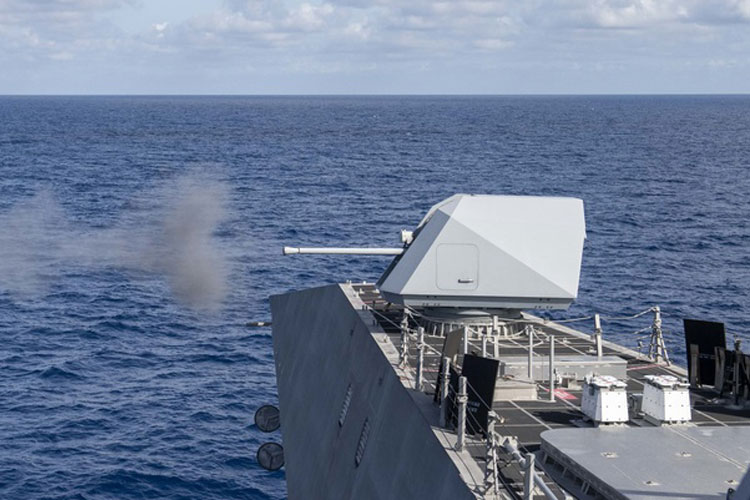 BAE Systems has received a $26 million contract to equip the US Navy’ Constellation class frigates with the automatic 57mm Mk 110 naval gun.

BAE Systems has received a $26 million contract to equip the US Navy’s Constellation class frigates with the fully-automatic 57mm Mk 110 naval gun.

The contract, awarded earlier this month, includes engineering support and calls for two Mk 110s for the USS Constellation (FFG 62) and USS Congress (FFG 63). The new Constellation class of multi-mission guided-missile frigates is designed to operate in blue water and in the littorals, for an increased forward naval presence.

The Mk 110 gun system, known internationally as the Bofors 57 Mk 3, is the deck gun of choice for the Constellation class. It is a multi-mission, medium-calibre shipboard weapon, effective against air, surface, or ground threats without requiring multiple round types. The system is capable of firing up to 220 rounds per minute at an effective range of more than nine nautical miles using BAE Systems’ six-mode programmable, pre-fragmented, and proximity-fused (3P) ammunition.

“The selection of the Mk 110 for the US Navy’s Constellation class frigates signifies confidence in the gun system and its ability to meet current and future needs in shipboard defence,” said Brent Butcher, vice president of the weapon systems product line at BAE Systems “The Mk 110 gun system provides this next-generation frigate with the continued performance that our surface fleet has come to expect from its intermediate calibre guns.”

The 57mm Mk 110 is currently in service on the Navy’s Littoral Combat Ship and the US Coast Guard’s National Security Cutter. To date, BAE Systems is providing 39 Mk 110 guns to the Navy and 15 to the Coast Guard. Worldwide, 103 Mk 110/57 Mk 3 naval gun systems are under contract with nine nations.