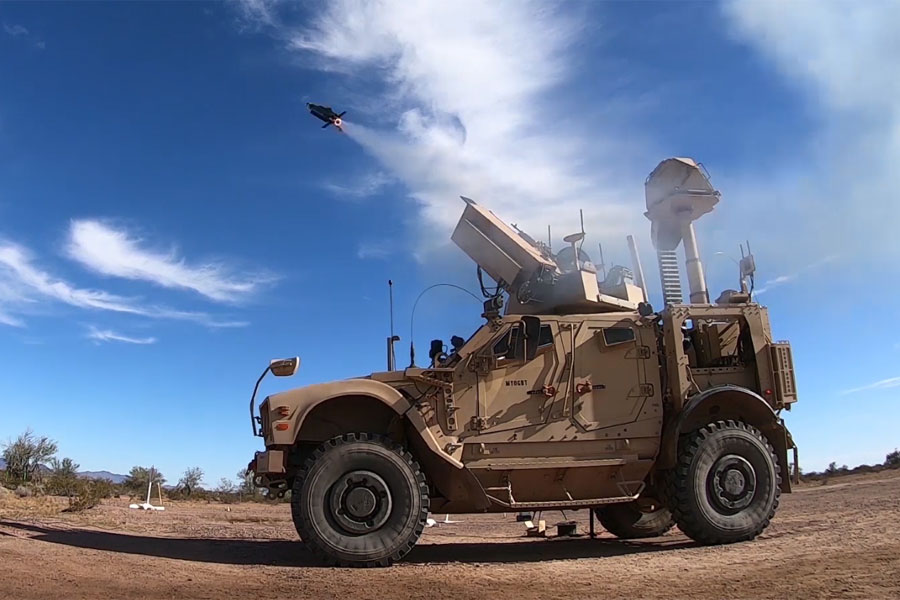 In the Arizona desert, drones flew across the summer skies, alone and in swarms. They represented what the US Army has identified as a critical problem: the proliferation of unmanned aircraft systems, or UAS, and the cost of defeating them with traditional defence systems.

At the Yuma Proving Ground, Counter-UAS team members from Raytheon Missiles & Defense, a Raytheon Technologies business, gathered alongside their partners from the Army’s Integrated Fires and Rapid Capabilities Office as well as representatives from international partner nations. At the 10-day test event in August 2021, they all watched as Coyote interceptor variants, the KuRFS precision targeting radar and the Ku-720 mobile precision targeting radar – all Raytheon Missiles & Defense products – were put through their paces.

Pivotal partnership: Both the Ku-Band Radio Frequency System, or KuRFS, and the kinetic-defeat Coyote interceptor have been deployed under what the Army calls Urgent Operational Needs programmes, meaning those that are demonstrated as effective against a range of threats and are fielded faster. As part of a long-time partnership with the Army, Raytheon Missiles & Defense has continued to mature the KuRFS fixed-site and Ku720 mobile radars and the Coyote interceptors to serve a greater number of warfighters across Combatant Commands and the branches of the Armed Forces.

“Being able to demonstrate the Ku-720, especially the benefits of its mobility, has been the result of a years-long collaboration with the US government customer,” said Sam Deneke, the company’s vice president of business execution for Land Warfare & Air Defense. “It’s not an exaggeration to say that this program would not have come nearly as far or as fast if the Army’s Integrated Fires and Rapid Capabilities Office was not a tremendous partner, coming at it from a collaborative viewpoint.”

Defence in depth: Adversaries have shown they can use drones to carry out complex, synchronized attacks, making it increasingly crucial to address the proliferating threat they pose to military and civilian installations. “It’s less about the capabilities of the drones themselves, although certainly they are evolving, but it’s about the evolution of UAS tactics,” Deneke said.

These days, those tactics can overwhelm a singular defensive system. Therefore, Raytheon Missiles & Defense takes a ‘defence-in-depth’ approach – building counter-UAS systems in layers to ensure integrated defence against drones in any environment.

As a scaled down version of KuRFS, Ku-720 is specifically designed for highly mobile operations. It reduces the size, weight and cost of the currently deployed KuRFS, while retaining its same proven technology for surveillance, threat detection, identification and tracking. KuRFS’ high-resolution imaging enables it to quickly pick up the track of airborne threats launched at close to medium ranges. The radar sees across a full 360 degrees, identifies threats with precision and cues defensive weapons accordingly.

“KuRFS is an outstanding radar that that we’ve developed, also in tandem with the same army customer,” Deneke said. “As the fire control source, it provides situational awareness and queueing for the Coyote effectors, or interceptors.”

The summer 2021 test period also accomplished several key milestones for Coyote interceptor variants. The Coyote Block 2 defeated threats at longer ranges and higher altitudes than similar class effectors, gaining US Army approval for deployment. Using its upgraded subsystems, it responded more quickly and with increased lethality against Group 1-3 UAS threats. Meanwhile, the non-kinetic Coyote Block 3 interceptor was approved for an overseas operational assessment, after demonstrating its fully integrated system-of-system capabilities at extended ranges. It was effective against multiple Group 1-3 UAS threats and was retrieved, refurbished and reused during the same test period.

These accomplishments would not have been possible, Deneke said, without the partnership between Raytheon Missiles & Defense and the US Army’s Integrated Fires and Rapid Capabilities Office: “Working hand-in-hand to quickly develop this customizable technology, and doing so in this time-frame, on both Coyote Block 2 and Block 3, is unrivalled.”

A step ahead: “Together with our Army partners, we showcased the maturity and lethality of our Counter-UAS systems against single and multiple drone threats to both US and international customers,” said Abel Ghanooni, senior director for Short Range Air Defense and Rapid Development Programs at Raytheon Missiles & Defense. “These tests move us closer to deploying Coyote and Ku-720 globally so they can protect service members and critical assets from enemy drones.”

Deneke added that the company’s counter-UAS team is “continuing to work with the US Army to evolve our capabilities and systems. We have to anticipate where the technology and tactics are going and be tremendously prepared to ensure that we’re a step ahead of any potential adversaries at all times.”