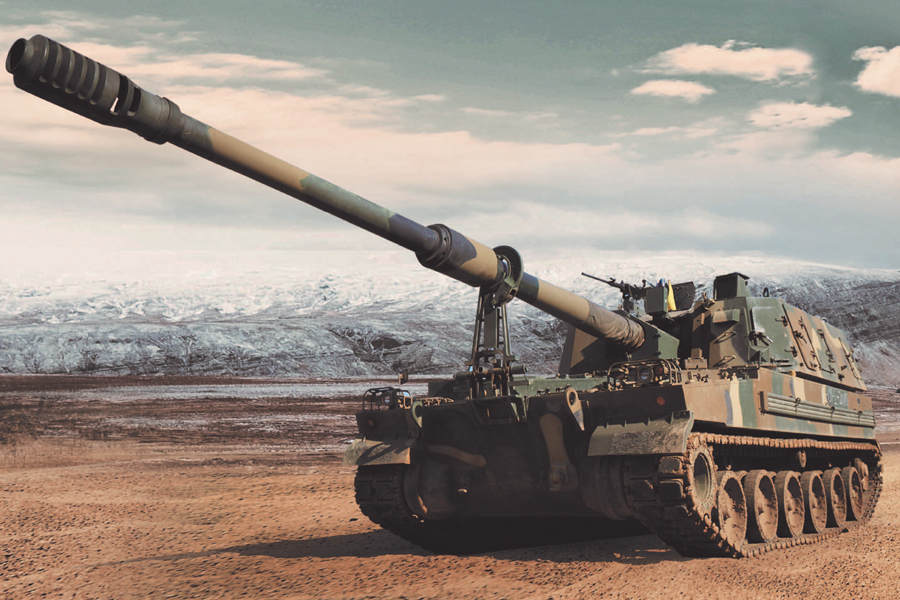 Attending the largest land power exposition in North America, hosted by the Association of the United States Army, Hanwha Defense is set to showcase a range of flagship land defence platforms, including the K9 Thunder Self-Propelled Howitzer (SPH) and the Redback Infantry Fighting Vehicle (IFV).

A modified variant of the classic K9 SPH, the K9A1 will be exhibited at the Walter E. Washington Convention Center as part of efforts to demonstrate the future growth potential of the 155mm/52-calibre self-propelled gun, which is evolving toward an automated and unmanned artillery system.

Upgrades for the K9A2 variant are in full swing, as the newer version is envisaged to feature a fully automated loading system instead of the semi auto-loader for the existing variants. The automatic turret will allow for fully autonomous firing with a rate of fire of nine+ rounds per minute, as well as reducing the number of crew from five to three soldiers. The possibility of introducing composite rubber tracks is also under examination to improve mobility. One of the final two contenders for Australia’s LAND 400 Phase 3 program, the next-generation Redback Infantry Fighting Vehicle is expected to be at the centre of attention because of its state-of-the-art technologies meeting the needs of global IFV requirements.

The Oshkosh Defense consortium, which includes Hanwha Defense USA, was chosen in July 2021 as one of the five contenders for the Concept Design Phase of the US Army’s Optionally Manned Fighting Vehicle (OMFV) program designed to replace M2 Bradley Fighting Vehicles that have been in service since 1981.

“AUSA 2021 is a milestone for Hanwha Defense USA, as our company benefits from a clarity of purpose – to apply the technical and industrial resources of Hanwha to addressing the requirements of the US Department of Defense, specifically, the US Army,” said John Kelly, head of Hanwha Defense USA.

“As a partner on one of the successful OMFV Concept Design teams, Hanwha Defense USA has arrived as a significant contributor after a little over three years in the US market and will continue to grow adding US jobs and capability,” Kelly added.

Among other products to be displayed are the Tigon wheeled armoured vehicle and the BIHO II air defence system. Developed in 2018 as a successor to the 8×8 Black Fox armoured vehicle, the Tigon has a maximum road speed of 68mph with an operational range of 500 miles. The armoured personnel carrier can move in water with a top speed of 5.3 mph. Hanwha Defense has developed both 6×6 and 8×8 variants of the multi-purpose Tigon vehicle, which can be armed with different types of weapon systems through a modular design. The vehicle is fitted with improved armour protection capability with the application of add-on armour and mine protection equipment.

The BIHO II is a next-generation air defence system in the conceptual development phase. An upgraded version of the Hybrid BIHO tracked self-propelled anti-aircraft gun and missile system in service with the South Korean Army, the BIHO II system on a wheeled vehicle is to feature improved detection and tracking capabilities to better identify all types of aerial threats ranging from small drones to fighter jets.

“Hanwha Defense has successfully expanded its global presence based on expertise and experience in the field of land defence equipment over the past four decades,” said Son Jae-il, President & CEO of Hanwha Defense. “Looking further, we are constantly evolving toward becoming one of the top players in the military land systems market by developing superior technology to provide global-leading solutions.”