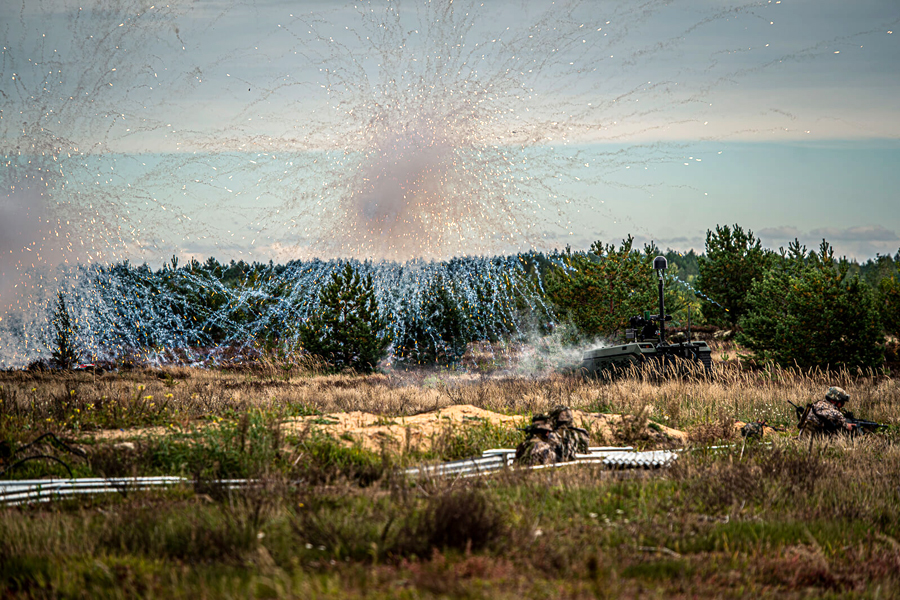 Future roles for 5G autonomous military solutions were showcased by the iMUGS Consortium at an LMT-led demonstration in Latvia.

Press Release, Riga, 24 September 2021: The future role of 5G in autonomous military solutions has just been demonstrated by LMT, the leading mobile network operator in Latvia, in collaboration with the iMUGS Consortium. The demonstration, during which various scenarios were played out in battlefield-like conditions while showcasing specific use cases, took place today, on September 23rd, at the Ādaži military base in Latvia.

This was the second of a total of six demonstrations with the aim of showcasing the results of the iMUGS (Integrated Modular Unmanned Ground System) project – one of Europe’s leading defence industry development projects. The demonstration was organised by LMT, one of the members of the iMUGS consortium, with the support of the Latvian National Armed Forces and the project coordinator Milrem Robotics.

During the demonstration, the troops played out close-to-reality military scenarios in operational environments and relevant climatic conditions. Milrem Robotics’ unmanned ground vehicle THeMIS, was used, along with a number of other cutting-edge military technologies, such as:

Alternative communication networks were used by the troop and an unmanned ground vehicle, in scenarios that included switching from a tactical network, provided by Bittium in collaboration with LMT, to 4G and 5G networks.

‘These days, cybersecurity solutions are equally important as physically securing a nation’s borders. That’s why LMT, together with partners from various countries, are working together to research the development of innovative technologies with the aim of strengthening Europe’s defence capabilities. Our expertise in machine vision and machine hearing technologies, telecommunications, and IoT sensor integration into mission management systems is what provides the technological foundation for increased reaction time via autonomous technologies. This makes it possible to evaluate situations faster and can be the crucial moment not only for individual countries’, but all of Europe’s safety.’ – Juris Binde, President of LMT

‘The Latvian Ministry of Defense and National Armed Forces recognise the obvious potential that innovative technologies offer for strengthening both our national defense capabilities, as well as that of the EU and NATO Allies. The innovative defense industry forms one of the critical pillars of our Comprehensive State Defense System. Towards that end, we have actively supported our industrial participation in European Defense Fund projects and now, I am truly satisfied to observe such a variety of Latvian innovators participating in iMUGS demonstrations, solidifying their well-deserved place at the forefront of those who are setting the future standards for unmanned technologies in Europe.’ – Artis Pabriks, Minister of Defense of Latvia