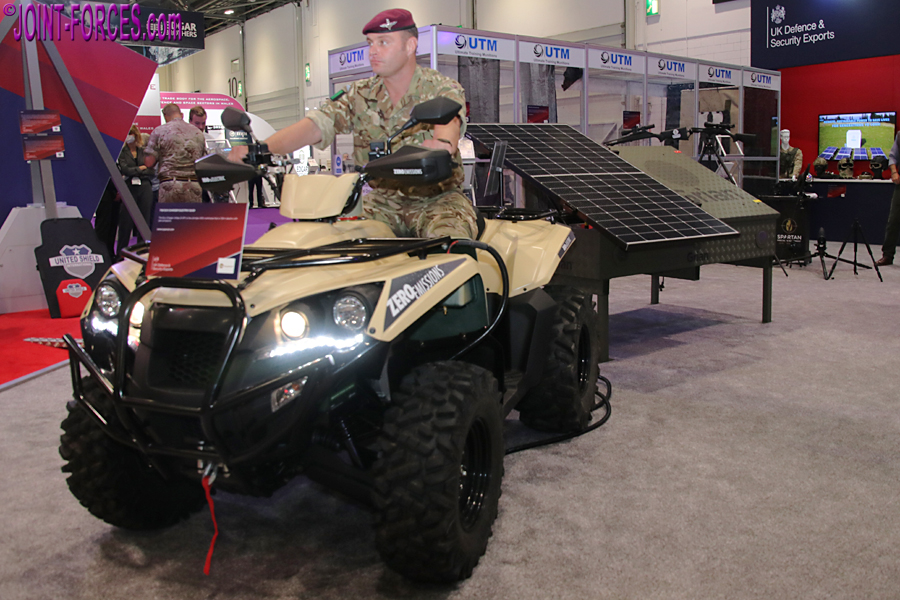 Unveiled to potential military purchasers on 14th September on the UK Capability Showcase stand at the DSEI 2021 expo in London, the Vizsla E-ATV (Electric All Terrain Vehicle) is a militarised version of the Eco Charger Quad produced in cooperation with Supacat.

In addition to being probably the first specialist defence journalist to photograph the Vizsla prior to its official ‘reveal’ at the DSEI 2021 defence expo last week, I had hoped to have the chance to photograph it out in its natural environment back at its West Country home this week. However that plan had to be put on hold when a Supacat spokesperson confirmed on Wednesday that the first Vizsla had just been sold to an undisclosed customer who insisted in a confidentiality agreement as part of the sale.

A second demonstrator will shortly be manufactured and I hope to be around when it tackles Supacat’s test track. However as my assignment diary for the next month or so is even more packed than it was over the last four weeks (thankfully BIDEC in Bahrain, due to commence in a month’s time, has been postponed) it will be a matter of pure luck if I manage to catch Vizsla No.2 before it too gets snapped up by one of the many potential customers who were expressing great interest in this unique vehicle at Excel.

Footnote: The Vizsla is named after a Hungarian type of retriever which is famed for its ability to sniff out game; the ultra-quiet Vizsla E-ATV is primarily aimed at specialist recce customers who rely on stealth to achieve their mission. Supacat will be the Vizsla Quad Prime Contractor into Defence, providing support with spares, repairs, training and post design services. Eco Charger will supply the systems, from its Weston-Super-Mare facility, to Supacat for assembly at its Devon facility where British Army’s 6×6 ATMPs (the original Supacats) and HMT Jackal family were developed.