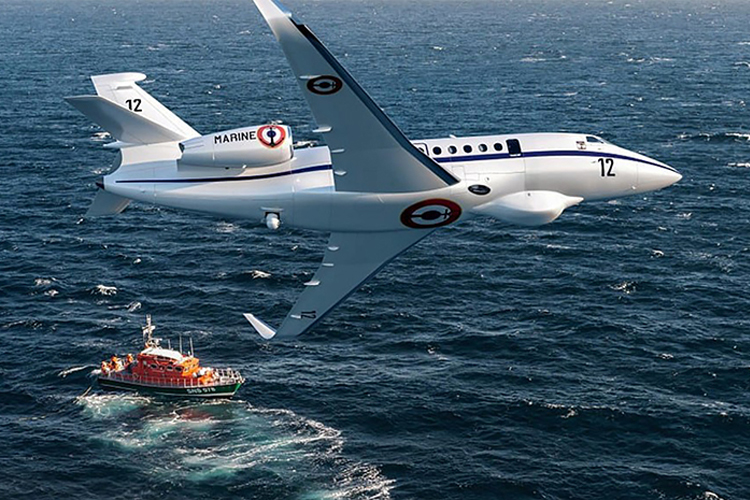 Press Release, Paris, 20 September 2021: Dassault Aviation has awarded Thales a contract to provide its SEARCHMASTER surveillance radar and the mission navigation system for the AVSIMAR programme to renew the French Navy’s fleet of maritime surveillance aircraft. The programme includes the acquisition of 12 Falcon 2000 ALBATROS aircraft to replace eight Falcon 50 M and five Falcon 200 Gardian aircraft that will be withdrawn from active service between 2025 and 2030.

With the growing density of maritime traffic, threats such as fast inshore attack craft and jet-skis used by pirates and other illegal operators are an increasing cause for concern in every part of the world, including France’s areas of interest. Best-in-class maritime surveillance capabilities therefore need to be deployed in coastal and littoral areas to detect and track these intelligent, agile targets in all sea states and visibility conditions.

The ALBATROS aircraft will rely on Thales equipment to conduct maritime surveillance and intervention missions to meet these requirements. Thales equipment and systems on board the ALBATROS will include the jam-resistant mission navigation system, which will provide the aircraft’s onboard sensors with extremely precise positioning data to meet operational requirements on civilian missions and in hostile military environments. Connected to the aircraft’s mission system, the Thales solution includes the TopAXYZ inertial navigation system, the TopStar 100-2 military GPS and the TopShield CRPA anti-jamming system.

This sophisticated suite of equipment will provide the Falcon 2000 ALBATROS aircraft with the level of precision and detection sensitivity needed to expose surface threats early enough for appropriate action to be taken in any situation.

“This award validates our strategy of developing highly capable solutions for military platforms and constantly anticipating our customers’ requirements. Our high-performance navigation systems, and our surveillance radars for special-mission aircraft including the SEARCHMASTER radar, rely on the very latest technologies and are already in service with the armed forces.” Philippe Duhamel, Thales Executive Vice-President, Defence Mission Systems